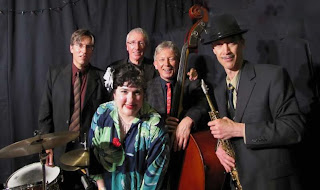 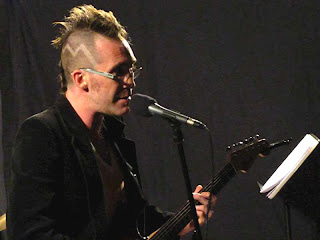 What a fascinating night it was! The Cosmopolitan Cabaret was a fundraiser for two development projects in Timor, one for micro finance in West Timor and another for sustainable farming in East Timor. The audience was committed, friendly, intelligent and the performers were diverse, local and interesting. It was not your normal display of jazz chops. This show covered folk, rock, classical song and cabaret-jazz. My band, the Gossips, started up with the cabaret-jazz playing ‘40s-era tunes with a cabaret bent: Ellington, bop, latin, even war-time singalongs. Great fun and some decent soloing all round. Congrats, guys … and our Darling Sister Leanne. Then Drew Walky with punk-cum-mod singer-songwriter songs of Canberra. This was interesting lyrics, strummed strat and a great line in dry vegetal stage humour and some amazingly capable number guessing from the audience. Then soprano Kristen Mann singing several songs by Debussy accompanied by Gossip Mike Dooley on piano: a change and a delight. A wonderfully strong and serene soprano voice filling a reverberent hall; no PA wanted or needed. Delicious! Then the fabulous Cashews. The Cashews are Pete Lyon and Alison Procter and are a Canberra alt institution. Famed for guerilla gigs (I dream of this, but it doesn’t work quite as neatly with double bass), clever, humourous, sometimes touching lyrics, easy and pleasant stage patter, these are a gem. The harmonies are so sweet, the ambience is light and humourous, the playing is capable and the songwriting is relevant and intelligent. Don’t miss their “acoustic-brain-pop”. Then more rock-influence with Andrew Holmes and Naomi Milthorpe performing songs of Ryan Adams. Not nearly so humourous. [Wikipedia notes that Ryan Adams recorded one album called the Suicide Handbook which was rejected on the grounds that it was "too sad". Hardly Cashews territory.] The end of the night was Gossips for our second set. So, a great night. Lots of varied sounds and emotions and a good cause.