Loft, as in NY

Carl Morgan played at The Loft the other night with his Quintet. I haven’t been to New York, but Carl has, and this seemed to me to be just what I’d expect in that aggregation of little bars with players from around the world experimenting at the forefront of the art. I loved it and it’s probably unique in Canberra; very special. 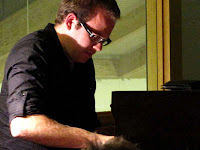 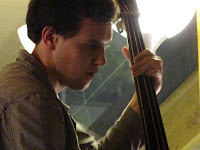 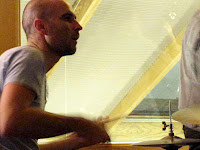 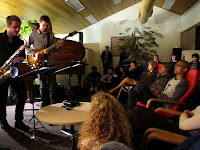 But this is not music for the fainthearted. It’s demanding for both performers and audience but it’s also engaging and satisfying for both. The rhythms are complex, the melodies are contorted and busy and the flow of the compositions is none too clear at first glance. I was trying to count the first tune of the night: I thought maybe 14 but there seemed to be occasional extra beats here and there. There were. Talking to James the drummer afterwards, he told me it was a 4/4 (I was floored by this) played in 5-7-4 totalling 16 (this sounds more likely). Likely, but none too easy to fathom or to play. The grooves were syncopated-modern with just one or two walks that take on a delicious quality amongst the broken beats. James was just playing around the groove and implying the rhythm with skills and subtlety aplenty. Bassist Alex had some ostinato lines or was playing on 1-2+, a common latin-like beat, but in the contemporary jazz idiom, and embellishing with fills and long intervals. I suppose all this is classified as polyrhythm, but it’s certainly rhythmically complex. A drummer next to me noted pianist Steve played rhythmically, but I noticed more his solos that were obscure to my ears: closely spaced lines that repeated, regular but not quite sequences, busy and constant, not flourishes but a moody activity that buzzed and bent the underlying harmonies. Again, I’ve heard this before but on recordings, not locally, and my ear places it somewhere around the bleeding edge. The front line of Carl on guitar and Mike on tenor were more clear in relationship to harmony, although both were melodically challenging and had expert chops. Carl and his constant overdriven guitar tone were solid and even, framing lines that were smooth, although phrased and intervallically jumpy, and making lovely use of fretboard positions to move through modes, and throwing in those occasional devastatingly fast flourishes (that had me laughing in elation) or just plain modestly fast lines (still gems). Mike was more constant in melodic concept, often using sequences to move around the tonality, and with a physical presence that reminded me of Jamie Oehlers, bending knees into the low tones and arching back for higher runs. Alex was similarly physical, bending into the bass for the thumb positions and sometimes remaining crouched into the body, and thinking back, Steve was well bent over the keyboard too.

The tunes were originals, several by Carl but also by Mike and Steve, and just one by a US sax player, Dave Binney. Not all tunes had such a difficult conception of time; one seemed a 32 bar tune (or thereabouts); one was a walking swing. I thought I noticed development between a few of Carl’s tunes. I think it was Wheel that was an earlier composition, and relatively (I do mean “relatively”) sedate and less complex. Whatever, this was a brilliant evening of challenging compositions and playing at the forefront of contemporary jazz, at least here in Canberra, and heard in a nicely intimate environment. That pretty much adds up to bliss to my ears.

This sounds good. But I did a search for The Loft on the net and drew a blank. So aside from joining face book how can I find out about gigs here?