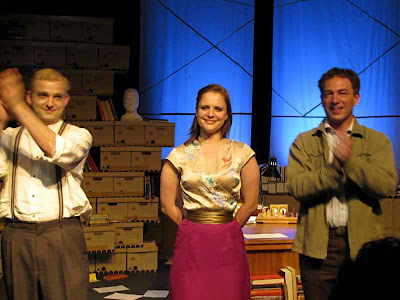 So decided Dr Paul Langley in the play Lies, love and Hitler. I saw it last night at the Street Theatre and was intrigued by the moral complexities it mulls over. Certainly Hannah matters, but I’m not sure I would have taken the path the Paul Langley chose … but then I’m no great romantic. The blurb talks of the moral complexities of truth and lies and moral and emotional commitment and places them in the context of the Dietrich Bonhoeffer. Bonhoeffer is now well-known in Australia after Rudd laid claim to him before the 2009 election which rolled Howard. He was a theologian who was involved in an attempt to kill Hitler. There’s an obvious moral dilemma here: can a person committed to God kill or, on a lesser plane, tell lies to prevent exposure of the plot? The utilitarian says yes, the moral purist says no. It’s not hard to sympathise in a black and white case like Hitler and I’m comfortable that the balance of evils supports Bonhoeffer. But there were other thoughts that occurred to me during the play. Bonhoeffer (39) was engaged to a younger woman (19) at short notice and this seems very demanding, but then Bonhoeffer’s world was pretty extreme. The play uses his letters to his fiancee within the plot to parallel theologian and lecturer Langley’s relationship with his student Hannah Summers. (Lecturer/student relationship alert! We are in the vicinity of a university, but there’s another related plot twist that I won’t reveal.) Langley pines that he hasn’t had the momentous experiences of Bonhoeffer, to which I thought of the curse of living in interesting times. War may be exciting and anything but trivial, but I reckon our relatively sleepy comfort is more productive and probably more satisfying if used effectively. The decision to “sin boldly” was a fabulous line, but it didn’t sit quite right with me in that context (although I may be rethinking my first impressions). I noticed a few lines that jarred with cliches and was surprised that the play was long enough to support an interval. A friend lamented the audience’s laughs at times of pressure, but a little black humour seems to me a sensible response to some difficult quandaries. But these are trivial comments. This was a lively, verbal, searching work that succeeded in outlining some quandaries that will always be with us. I’m stunned that this is a local work, one of the “Made in Canberra” theatre series at the Street Theatre. Great work and thoroughly well presented and very fulfilling. Congratulations to all involved, especially playwright Elizabeth Scott, cast Dallas Bland (Bonhoeffer), Hanna Cormick (Hannah) and James Scott (Langley) and the Street Theatre for supporting such great local works. 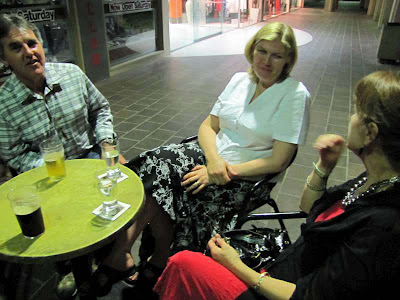