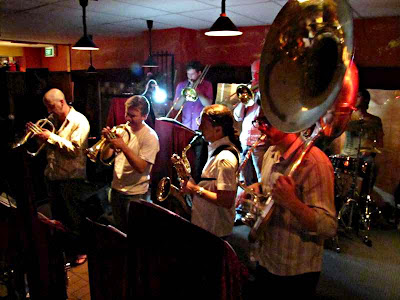 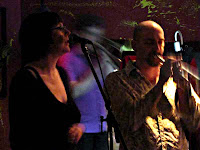 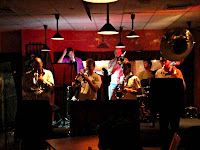 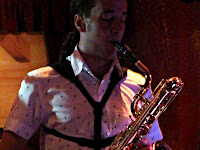 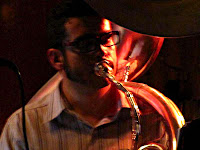 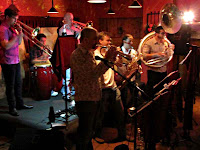 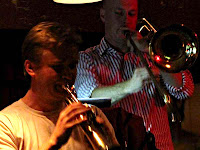 The opening of a new venue is a night of anticipation. Thus it was when Legends opened for the first night with our local New Orleans-inspired strolling brass band, Brass’ere. This venue looks like it will be catholic in its tastes, with Ax Long playing a more post-bop style next week and Latin on weekends. But Brass’ere’s influences and the fact they can be mobile shouldn’t suggest something from lost past. They played Michael Jackson and Honky Tonk Woman as well as St James Infirmary and even threw in a miked and distorted trombone for a guitar solo (through a genuine Zoom guitar pedal, no less). But of course, the essence of the loud and strident brass tone was always there from pairs of trumpets and trombones and a thumping, billowing sousaphone. Sousa’s a great big, round sound with no sustain and lovely to hear and it even works with funk. But there were a few ringins in this brass band. I could hear the drums easily enough, and Mi Tierra’s percussionist was sitting in for the night, but there was one reed: Nathan on baritone sax. I only thought of this later, too late to isolate the tone, and brass purists may not be happy. But the clear, bell-like tone was predominant, so all is well. Courtney appeared on a few songs, but there were plenty of instrumentals, including some light and friendly originals like The song that could. I’m looking forward to hearing the strolling band. Even drummer Nesci walks with a snare. That’s the final and definitive connection with New Orleans and jazz funerals and the rest. I assume they drop the rock tunes from the repertoire for a genuine funereal march. But I jest, which fits the good humour on stage on the night and the effervescent nature of a brass band.