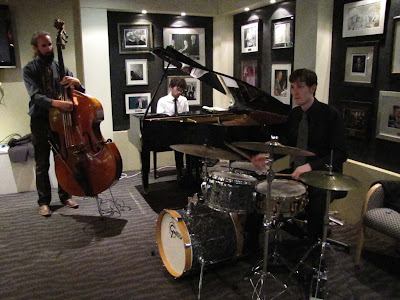 There are times you are surprised by your own city. This is one of them. I write after hearing some mates playing at the National Press Club the other night. Andy Butler, James Luke and Evan Dorrian were performing. This was a standards gig, and I heard just a few tunes, but it was subtle and inventive, nicely settled and richly interpreted with sparse piano that searched honestly for lines, James’ open and gently funky bass and Evan’s busy and telling solos. This is just a club gig, but the band gave such a satisfying and exploratory response. Great stuff. That was Friday evening. Then Saturday morning, I had a very Discreet Charm of the Bourgeoisie moment. I was driving around Manuka and I spied a little walking group led by a guitar with Graham Monger attached. There was a big black bass bag with player by his side (who? Phill Jenkins, perhaps?) and a third person behind who must have been Dirk. They were obviously looking around for a house Auction notice, and there was one only a few houses away. I know how much I enjoy their playing, but they were only seen not heard this time. Then Saturday night, I attended a play at the Street Theatre: Truth, lies and Hitler, which was very, very impressive. I knew it to be written by a Canberra playwright, and that was impressive. Then I realised it’s part of a series called “Made in Canberra” that’s running at the Street Theatre. Just how much is there around this town! If you look, that is. I suppose most comfortable wealthy cities have similarly impressive arts communities, but I remain blown out by our own. If only there were more time. Congratulations to our little but vibrant community.