Modern life is very much lived in the fast, unrelenting present: we forget our history, which also means that we forget our dues to the past. I don’t come at the argument that jazz ended in the ‘60s but I value history. Leigh Barker’s Quartet obviously do too, and I found their recent gig at the Gods was refreshing and different because of it. 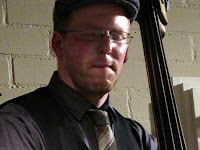 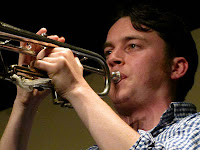 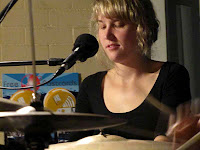 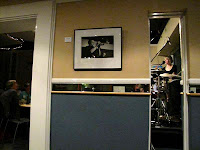 Leigh with his acoustic bass (truly acoustic: miked, no pickup) and slapping technique and gut sound led the outing, but Mark fitted admirably with older-style grooves (sometimes strange and clumsy to my modern-influenced ears but which just fitted) and always sharp rolls and accents and rimshots and hihat sizzles and the solos from Sarah and Eamon were talking with a blues accent. One mate spoke of the piano solos as “gritty”: a nice metaphor and it fitted often enough. I was initially hearing hard bop: strong tonal lines and solid swings with that blues background. But as the night wore on, I started hearing more styles, more influences. Piano and trumpet both broke from consonance for lines that spoke clearly with dissonance and substitutions, and even touches on modal styles and more linear improvisations, rather than locking to the chord changes. But then, back to the past, with lovely gentle swings and vocals from Sarah on an old song, Please be kind, as played by Sinatra/Basie, that reminded me of the current wave of female jazz singers. And a historically apt interpretation of What is this thing called love, sung by Eamon and finishing the night with a touchingly distant and devastating interpretation. Just last weekend, Eamon won the Wangaratta National Jazz Award, this year for brass, so I wasn’t surprised by his fluency and command. His was a masterful performance: a forceful tone, clearly enunciated; melodic, structured, fast solos with growls and bends and releases; wonderfully present and in command. These were not long solos but they spoke clearly and authoritatively.

I think it was the phrasing and rhythms that determined the band as located so much in history, despite the dissonance and modal freedoms that appeared throughout the night. This was harking back to pre-bop, but influenced by many generations after. Or was it the other thing I noticed, that the lines were just right: apparently simple because they were so unjarring. I noticed that first with Sarah’s solos: apparently simple, mostly arpeggiated, and so right. Musicians know this is no easy achievement. It takes work to play simply and inevitably: it’s not something you can fake. James LeFevre was there, and in true jazz bar style, he sat in for the last tune. James played very well, but differently: a longer solo, more modern-challenge, more ecstatic, less classical. It was an interesting juxtaposition and so appropriate for a band that exuded jazz history in bars and bordellos to invite in the local.

I very much enjoyed and was refreshed by Leigh Barker (bass) with Eamon McNelis (trumpet), Sarah McKenzie (piano) and Mark Sutton (drums), and James LeFevre (tenor) sitting in for the last tune.
Posted by Eric Pozza at 6:31 pm

I was sorry to have missed this Eric as I like to see Leigh when he is in town but we were unfortunately (well, perhaps not quite that) in Hong Kong.