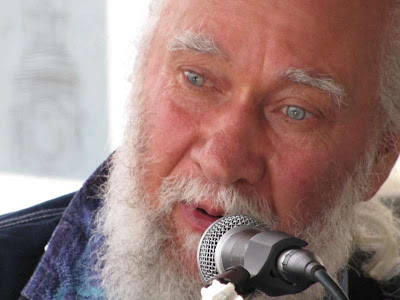 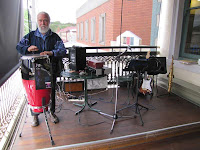 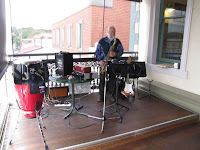 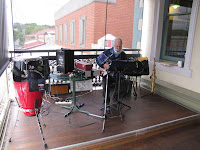 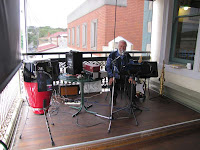 I was in Beechworth for the weekend, now a tourist town of restaurants and B&Bs and boutique breweries and once a gold town and a haunt of Ned Kelly. There was jazz here, too, in the guise of John Bisignano. I hear that John is a music store owner and music teacher in Wangaratta, another town in the region and one of great annual interest to readers of CJ. John was playing at the very busy and successful Beechworth Bakery, upstairs on the open verandah. I heard a melange of instruments going up the stairs, but there was just one guy performing. But John records his own arrangements, and after a few tunes, I was impressed by his multi-instrumentalism and convinced he probably plays everything on his backing tracks. As I arrived, he was singing a ‘40s pop song with a very attractive voice. But on request, he switched through the various other instruments on stage: conga, tenor and guitar. The conga was pretty straightforward; the tenor playing was authentic, well phrased and with a decent tone; the guitar was bluesy, strident, even searing, again a good tone. But voice is the main means of musical communication and John sang warmly and with nice effect and a rounded, expressive voice. It was a nice interlude from touristing, although a delay before that boutique brewery. John Bisignano (voice, guitar, tenor, congas, more …) came down from Wangaratta to perform standards and early pop tunes at the Beechworth Bakery.
Posted by Eric Pozza at 8:36 pm

Nice post Eric ... of course, the rest of us missed this little treat, walking as we were in the fresh air!