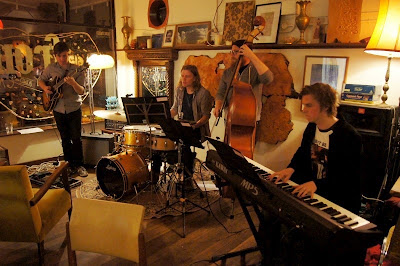 Another rare jazz event in Canberra. It’s got that way this year. This was just a little gig in a small venue, ‘93 Project at the Front, with a particularly small audience, but I enjoyed it lots. Leader and guitarist Jack Ray presented original compositions with a very nice local quartet. I mentioned to Jack that I heard it as Californian, or at least West Coast.

This was heavily jazz-influenced music of syncopations in melody and rhythm and inserts of complex fills and steady grooves behind solos. It was the overall laid back feel that said California to me. Jack was amused with the CA reference, but agreed the music was relaxed and easy-going. There was a ballad, some funk, plenty of ostinato basslines. East Brunswick was a sleepy, gentle Melbourne train trip with Cyndi and repetitive fifths on bass; Not was funky; Spare time was laid back with that West Coast groove; City was syncopated cool; Late night lights was memories of 505 and a commitment to jazz; 20 was the ballad, with syncopated bass giving way to a straighter bridge; Soundtracks was an inquisitive 4 to the floor. The band settled to a beautifully relaxed and responsive unit with dynamics building over solos, then settling to do it again for another. Tate’s solos were gems, classical colour and harmonic richness but then an exemplary single note style against funk. I thought Rhys’ awareness and humility in the drum seat worked nicely with Phill’s busy right-hand syncopations. This was responsive and undemonstrative but wonderful support. It was quite a gem of a rhythm section this night. Jack led with solos that were both intervallic with stretched fingers and sometimes choppy or overdriven. At times, I thought the grooves were almost poppy, even if the heads were more jazz-complex. This was presentable music that had one of the small, unexpecting audience dancing in her seat. Listening especially to the easy but responsive rhythms, I felt experience not just training, musos with a bit of time after school to define themselves and remember what personally clicks. It was only one set, but it’s one of few these days and I enjoyed it lots. Well done, especially given that ’93 was only 20 years ago.