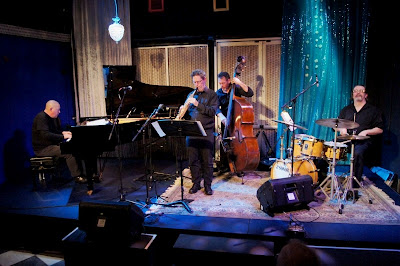 The band is called Tight Corners. Phillip Johnston explained tight corners as the quirky, twisted backwaters of the jazz repertoire that are seldom played due to their harmonic and melodic challenges. I like tight corners and this was great stuff. This didn’t feel laid back or cool. This was strong, sounding joyful and carefree although seriously committed, and also good fun.

Phillip had some wry smiles, when he spoke or after he heard a well-argued solo. Jex looked up every now and then from some intense and dissonant piano and smiled. Jonathon and Niko were not so restrained. Their smiles were big and open and infectious and they both readily looked around amongst the band. They were enjoying the ride and so was I. Nothing here sounds too settled - it writhes and it’s punched out with lots of energy and considerable volume. And certainly none of this is too delicate. So I was surprised to hear some pretty straightforward understory at times from Jonathon’s bass, and fairly straight ride and the like from Niko and solos from both of them that were quite lyrical. All a disconcerting mix. The blurb for the concert quotes Downbeat, no less, as calling another incarnation from Phillip as post-modern jazz. It’s quirky, yes, but pastiche not parody. Pastiche respects; parody denigrates. This is a living music that has deep roots and is played with commitment. Keith located it in the late ‘60s but it’s a stream that goes back decades before that, at least to Monk in the’40s. This is standing on the shoulders of giants. Any field worth its salt has a history. They were playing the music of Thelonious Monk and Steve Lacy and Herbie Nichols. Monk, the great bebop pianist with the quirky sense of time; Lacy, the soprano sax explorer of Monk’s legacy; Nichols, the rediscovered pianist/composer in the same ballpark. Some tunes were recognisable (perhaps vaguely), although more from recordings than from live gigs: Brilliant corners, 2300 Skiddoo, We see, Terpsichore, Step Tempus, perhaps Skippy. Not sure that I recognised a few others, The bath or Bone. I was delighted by Jonathon’s bass, but that’s inevitable. His playing is so solid and reliable as he holds the bass together under some very adverse provocation. I particularly noticed his solo on Brilliant corners that was a model of undiverted lyrical beauty. Niko was easily accompanying but tellingly melodic in solos. Jex had forceful intent, edgy chord voicings and commanding soloistic presence. If anything, Phillip was gentler. They were reading so there was some reticence there and a sleek soprano sax has nothing of the forceful nature of a grand piano. I heard Philip as intellectually firm more than emotionally charged, finding paths of melody through the grooves and the chords. I was excited by this music but I don’t hear it often which is not surprising, because this stuff is hard to play. It’s not called tight corners for nothing. Great gig. Tight Corners performed at Street 2 for the Canberra Jazz project 2013. They are Phillip Johnston (soprano sax), Jex Saarelaht (piano), Jonathan Zwartz (bass) and Niko Schäuble (drums).
Posted by Eric Pozza at 6:33 pm