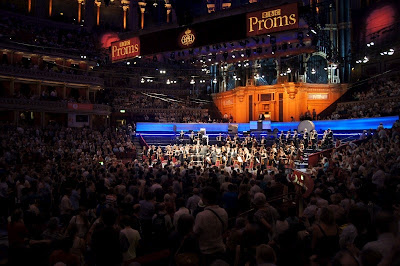 We were cocky about jet lag. It hit us at the Proms. Too bad, because we mostly missed a decent concert. It must have been a few drinks with dinner, but we were out of it. The Proms are an institution, of course. All very English in a delightful, unassuming way. This wasn’t the last night with its singing of stirring songs of empire: Jerusalem and Land of hope and glory and Rule Britannia.

This was an idiosyncratically casual outing with artistic validity. I learnt that Prom is a diminutive of promenade and refers to those standing in the dance floor area of Albert Hall. Albert Hall itself is now modern casual, its velveted tiers softened by green floating mushrooms under the grey cement of the dome above. Megan had dressed a little, but no need for that here. People were eating chips (crisps) in interval; no hoyty-toyty here, even if there’s some embrace of nerdity or even upper class twittery (cf Monty Python). These are people with a genuine enjoyment of cultivated music. Tonight’s works were a world premiere of Param Vir’s Cave of luminous mind which was all shivering or ever ascending strings with overlaid snippets of melody and tonality from all instruments. As I remember, the second movement featured a conversation between violin and viola (?) and the third blossomed with ideas all falling over themselves. Very filmic and presumably very hard to read. I liked this one. Then a much more romantic Sibelius Violin concerto in D minor played by Lisa Batiashvili. This seemed much less folky and Scandinavial that I’d expected from Sibelius. She played an encore of violin accompanied by strings and sounding very Russian. After interval, we heard the Celtic Symphony by Bantock with 6 harps and sounding more of rural vistas and lyricism. Then, to end, Elgar’s Enigma variations, an old standard and an apt composer for the Proms. We were nodding off throughout the concert, but it was a joy and a piece of core-Englishness of the times. There are masses of these Proms concerts and they are hugely popular. It’s summer when the Proms are out and about and there’s not a London Phil concert in sight. Worthy and relaxed.

The BBC Symphony Orchestra was conducted by Sakari Oramo at the Albert Hall in Prom 52. Lisa Batiashvili (violin) soloed in Sibelius Violin concerto in D minor, Other works were Param Vir Cave of luminous mind, Granville Bantock Celtic Symphony for six harps and strings and Elgar Enigma variations.
Posted by Eric Pozza at 12:30 am