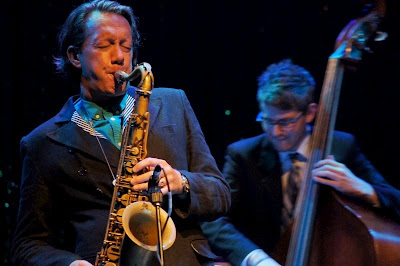 From the first notes of Nathan Haines’ concert I was taken back to Coltrane and Love supreme. Not that Nathan comes over as a Coltrane clone. I sometimes heard Trane’s approach and sound, but Nathan’s a much more solid player than that implies.

Bala suggested Scott Hamilton. This wasn’t running the chords like SH but it was firm tone, defined and clear and well-articulated. I was really liking his tone, thinking of hard reeds and metal mouthpieces and occasional squeaks that are a cost of good tone, even if it seemed somewhat out of place. This music was meditative and that was the obvious Coltrane link, with few descending chords spread over bars, or perhaps chromatic movements like in Milestones, often limited melody and nicely intoned but oft-repeating bass lines. Against this was the intensity of that mid-’60s era, fourths or dissonant comping on piano and turbulent drums. Even the titles sounded like the ‘60s: Realisation, Evanessence (admittedly the one non-original), Universal man, Ancestral dance, Vermillion skies. This mix was a little culturally dissonant but satisfying. There was also a swagger of presentation and control that I felt was eminently professional. This was neat and cool. Nathan goes back a long way with fellow New Zealanders Tom and Kevin but only one day with Paul Derricott who was sitting in on drums so there was a little reticence and also a limited repertoire. He had to apologise for not playing an encore as they’d already performed everything they knew with Paul. Good on him. Jazz comes together on the day but there’s professionalism and respect for the art in not being too lackadaisical. Paul didn’t look so relaxed, at least earlier on, but he did a good job, soloing when called on, leading in one tune and laying out some suitably restless drums behind solos. Tom sat steady and accurate on some simple ostinatos and this just held the whole together. I liked his precise and studied intonation and limited fills, and when he did walk on two tunes, it took on a new import. He took a few solos, too, very scalar and etude-like, with careful intonation and long, sequenced runs over the neck. Nice. Kevin is obviously an old hand with Nathan, having played on several albums. His soloing is a counterpart for the sax: traditional post-bop sax-like right hand lines with chordal fills in the spaces. I loved the sounds and harmonies, even if I occasionally got lost in some very long lines and contrary chording. It’s not an uncommon experience in modern jazz. Tom’s solid ostinatos reminded me of the advice to bass: play more in when others are playing more out. But a nice gig and everyone around me enjoyed it. So did I. No encore? So what.