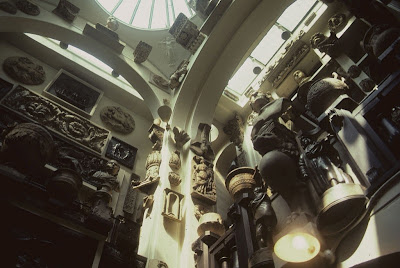 Any CJ readers will know we are hogs for museums. Geeky, perhaps, but we find they are the great pleasures of travel. We are in London and not for too long, so Day 2 was the perfect pairing of Sir John Soane’s and British Museums. They are neighbours and they have similar collection interests, but this may be where it ends. John Soane was an architect (he designed the Bank of England building and there are models of a design for the Houses of Parliament) and this is his personal collection in two houses developed for this purpose. The museum is both a visit to a tasteful person’s house of the enlightenment era and to the mind of a gentleman collector. He lived and developed this collection in the early-1800s. The living rooms, library, study, dining and dressing and the like are glorious detailed and furnished: ceiling lunettes, Turner yellow, inlaid chairs, Greek vases and the like. Some rooms are generous, but mostly they are small and as we move to the rear we walk into increasing profusion of objects and incidental playfulness with light and space. This is an architect collector, after all. The crypt and colonnades and Monk’s parlour and dome and Shakespeare recess are tiny and reeling in objects. The picture room’s gems are several Canaletto’s and Hogarth’s Rake’s progress, a story in 8 paintings of a Tom who gains and loses several fortunes and ends in Bedlam. The Monk’s parlour has various grotesques of mediaeval religious art. There are some casts (I saw this again at the V&A the next day) and some castaways (again, see V&A) but also some great purchases. There’s a fragment of the destroyed C13 Painted Hall at Westminster. The sarcophagus of Seti I is from the Valley of Kings and is one of the most important of Egyptian finds. They only take 70 visitors at the time; it’s free and it’s a short but overwhelming visit. Sir John Soane’s Museum is in Lincoln’s Inn Field, London’s home of Rumpole and barrister chambers.
Posted by Eric Pozza at 4:52 pm