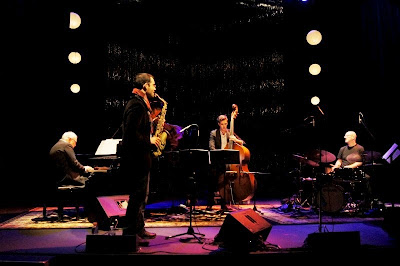 Jacam Manricks with Paul Grabowsky, Alex Boneham and Andrew Gander. It was the ultimate gig of the Canberra Jazz Project for 2013. Ultimate in several ways: an intellectual treat with virtuosic chops. There’s a spot of Paul Grabowski’s album, Tales of time and space, where, at the end of the blaster, Tailfin, Branford Marsalis exclaims “Great Caesar’s ghost”. That’s what this gig felt like. This was a stunner and the skills were top class; worthy of wooing them anywhere. Jacam, with his lithe, fluid compositions that sit so nicely and the perfect chops with the flowing streams of notes, mostly smooth, strained on call, always lucid in intent and punctuation. This time with Paul Grabowsky, endlessly inventive and a fine foil to Jacam. I wondered if sometimes this overflowing creativity clashed, but to be overwhelmed with skills like this is something I’ll suffer. Alex, as always, strong and supportive and with a sweet solo of 10ths and 13ths and the like, relatively undemonstrative but neatly intoned and careful and studied. Andrew Gander’s tumpy toms and kick, tuned low and throbbing (I’ve noticed this recently with other drummers and I guess it’s a new fad around Sydney or maybe wider) with neat upper cymbals register. I melted from some perfect 4-bar leadin fills in the final tune, Thread, which was premiered in this format. I mostly recognised Jacam’s tunes from his 3 CDs. Ondina (borrowed from a flute etude); Forbidden nuts & fruit, a slow punctuated 4/4 leading into a bass solos and then that busy interplay of piano and sax; Cry from Cloud 9; Mood swing with Alex bravely reading devilish syncopations; Cloud 9 in 5/4. These are interesting compositions: easily syncopated, fitting for Jacam’s melliflous tones and varied chordal movements, undemonstratively virtuoisic. Jacam’s technique is almost too perfect: rapidly repeating phrases that sit so unforced and dissolve into whatever that follows. He’s the son of two classical orchestral musicians, so I guess it’s that technique that shows. Paul hit me in much the same way. I noticed one spot where he was not expecting the solo but switched it on at will, all structured and inventive from the first note. Masterful stuff. This is just Canberra, but this could be anywhere. Memorable. 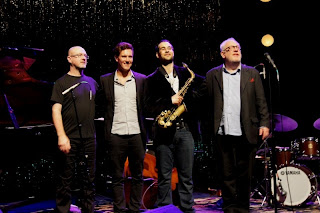