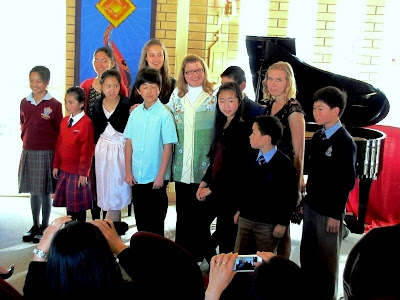 Some pianos are bigger, but the range of a standard grand piano is 88 keys, or about 7.5 octaves. But talking here or ranges, I mean something else. For the second time, I’ve heard a concert of the students of Marie Cull. She’s a renowned piano teacher here in Canberra and one who’s won AMEB awards. This concert had range: of age, of difficulty, of style. We heard pieces from young to old, boy to girl and a few duets. From etudes to Liszt and Chopin and on from Australian contemporary composer Ross Edwards. The young ones started with piano stool hiked high. I enjoyed all of this music: from the first etude, this was interesting. Marie must know her repertoire. Joshua Lee played first with an insistent, thriller-like 3/4 etude, Heller’s Study Op.46 no.3. Sarah Zhu followed with Bortkiewicz’ Butterfly which was flighty then heavy then dissonant then flighty again until a skewering pin brings its end. Vivienne Tran played a slower impressionistic piece, Night by Melartin, then teamed with Jerry Lu for more impressionism, Laideronette Imperatrice des Pagodes by Ravel. Bernice Chua and Sarah Zhu belted out a jazzy outspoken number with blues chords, The dancer by Dello Joio. Patrick Gu presented two Songs without words by Mendelssohn, a prettier, salon-style Op.102 no.5 then the a more driving 3/4 Op.102 no.3. Kirsten Leung played a twittering 3/4 called Forest Birds by Jensen. Then Jonathon Lee with Chopin’s well deserved, well known Nocturne Op.9 no.2. Bernice Chua played a Chopin waltz that I remember playing in my schooldays, but which I never played so well, the sometimes morose Op.34 no.2. I understood it better from this take with its distinct segments. Candice Lui played Prokofieff Prelude Op.12 no.7. This is also played on harp, and it’s a dead ringer, all rippling arpeggios and sweeps of notes. Then Fiona Backhouse with the slow, pensive, romantic Gluck Melodie, and to finish, Emily Buckley played emotional, varied, virtuosic piano from Liszt, Sonetta 47 del Petrarca, and a gentle, lyrical ¾ with big flourishes, Frangipani by Ross Edwards.

Very clever kids (some not quite so young)! Well done and much enjoyed. Marie Cull’s students performed at St Albans.
Posted by Eric Pozza at 5:54 pm