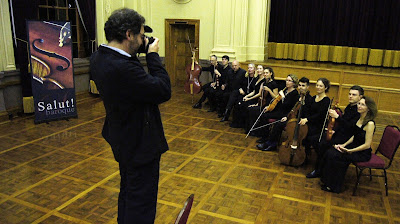 Salut! Baroque's latest concert was called the Virtuosic and Innovative Concerto. From the richly informative essay in the program and also from the five (5!) concerti they performed, it was obvious that the concept and form and size of the concerto has varied over time. These were concerti from the early days when increasing musical virtuosity led to the featuring of a section against another or a few instruments in context of the tutti. The composers were CPE Bach, Telemann, Corelli, Geminiani and Vivaldi. Perhaps two (CPE Bach and Telemann) had obvious front line soloists featured somewhat like a modern concerto does. The CPE Bach featured a baroque flute; the Telemann featured two violins. These are early instruments and not always so loud - I noticed that especially with the flute - so a solo instrument is not so easy to carry off. But this was an intimate performance, as performances presumably would have been, in court, and it worked nicely. Even then the harpsichord was a struggle and the pair of recorders were not too prominent. But such lovely playing and sweet tonalities. I was particularly taken by Matthew Greco's control and tone, as well as Anita Gluyas on baroque cello. He had the lion's share of leading the performers; she had the most prominent and consistent bass-like role. They were both confident and virtuoisic. I enjoyed some momentary smiles from Anita after some particularly challenging passages. She had a veritable workout in the Geminiani, then so did fellow bassist, Tim Blomfield on bass violin (apparently tuned one tone down from the baroque cello for better access to flat keys) on Vivaldi Concerto per l'Orchestra di Dresda. We all know the final movement to this one: it's a killer with rolling tutti semiquavers seemingly endless. It must feel that way when you're playing it. But cheers to all. This was a delightful and beautifully played, intimate concert from our quarterly visitors to Albert Hall.