Out of the woodwork 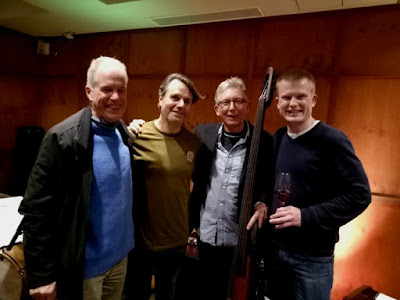 I don't write about every one of my jazz gigs; only for something or someone of note. Tilt played at the Olims Ainslie pub again and it was a great night. Cheers to Nitya who attended and sat in on tenor for a few standards. I played with Nitya when I was returning to jazz, sometime before the onset of CJ. Thrilling from a bass POV was getting out my NS NXT electric double bass. Bought off eBay sometime ago and never played by me in performance. After years on 6-string electric, I had reverted to four string and decided to settle on that (all my practicing had reverted to 4-string double), and, given I've never played 5-string, this (5-stringer) is not optimal and just a little confusing. But it's nice to change back to double bass jazz techniques. The style and approach is different, the rhythms and syncopations sit nicely and are more jazz-contemporary (my busy beat subdivisions on bass guitar are more funky than jazzy) and the thumpy tone of the piezo with these undetermined strings is to die for. So, a good gig and a discovery of something sitting in my cupboard. And a great topic of conversation, and that never hurt any band.