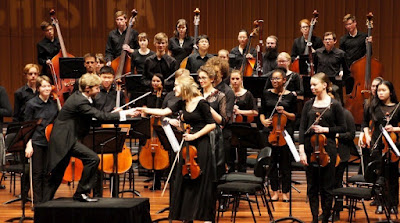 Hella good? Showing my age. No Doubt is earlier than these players, but that just adds to the pleasure of hearing such a nice orchestra of such a young age. This is the Canberra Youth Orchestra and I've raved about them here before.

Their latest performance was a dedication to Sibelius with his Symphony no.2. I noticed a plethora of tempo indications in the program, then some blistering playing from basses and cellos, extended walking bass, a noble final movement that follows directly from a lively-sorrowful-lively third movement, generous brass parts. The first half was Dvorak Slavonic dances and the enduring earworm Borodin Polovtsian Dances (not least through its reuse as Stranger in paradise in Kismet and by Paul Whiteman, Massive Attack, PS2/3, Sochi Winter Olympics, bond and more) and one movement of Tchaikovsky Violin Concerto D major played by Helena Popovic, who otherwise sits in the Concertmaster's seat. It's a big program and their dedication and application shows in some very impressive and mature playing. Not least from conductor Leonard who is so busy around town and includes CYO in his stable. He's a pleasure and great force for enthusiasm in rehearsal and it showed here again with his easy chatter with the audience to introduce the 2017 program featuring a more jazzy approach, with James Morrison, Idea of North and Claire Edwardes as guests and the music of Gershwin and Bernstein amongst others. This is a great training orchestra and it performs at an impressive level. But then I'd expect nothing less from Canberra's young players and we consistently get it.