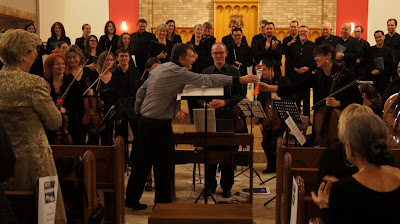 Let's face it. Bach is cool. The audience may not have been big enough and the hair commonly grey, but the four Bach cantatas played by the reformed Canberra Bach Ensemble were a great success and a huge pleasure. The cantatas were BWV119,131,138,34. All religious; I guess all written for Bach's weekly turnaround performances. Huge, complex works; riddled with brilliant counterpoint, often leaving tacets for various players, even violins; joyous and appealing or tragic and saddening; featuring solo voices or magnificent choruses. I wondered a feminist thought that had never entered my head: this is not an era of women's equality, but there are soprano voices and alto voices from women, presumably originally sung by women.

Perhaps the orchestra of the time was all male. But the thought passed as the music again spelt its magnificence. Andrew Koll was conducting an SATB choir of 27, including four solo voices, also SATB, and an orchestra of 27. No small feat. The place was St Christopher's Manuka and the sound was heavily reverberating, the seats were wooden pews. I recognised many players and singers so virtually all local, and Andrew commented on the strong local musical scene (despite ANU's wobbles). The sounds were presumably authentic to the era, different from a modern symphony orchestra. This group included recorders and Cor Anglais and organ continuo and massed trumpets and important bassoon bass lines and early walking bass. I loved the solo singing, Emma's soaring soprano through Maartje and Owen down to Andrew's bass: the vocal ornamentation and the earnest religious themes. But the choir is magnificence itself as it raises voice, a towering beauty of harmony from many fine voices. So a smile breaks on your face. It's blissful at these times. Bach is cool; a big Bach ensemble playing capably like this one is a thing of great joy. This was. The event was introduced by the German Ambassador but unusually she returned at the end of the performance, turning to the performers to talk for some time. This is German but now everyone's music and the German Ambassador was thanking Canberrans for playing it. To me, this just confirmed the success. CBE is returning for four Advent Cantatas in mid-November. It's a busy time, but I can only suggest don't miss it.