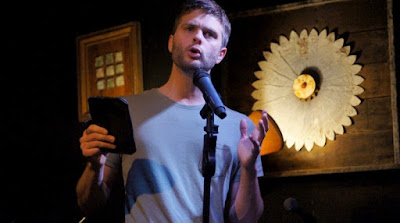 It's one that's close to home for all of us but especially for David Finnigan, for the subject is climate change and DF's father is a climate scientist. This show was one incarnation of the controversial work called Kill Climate Deniers. It was the drama-cum-dance-party version and it was performed at Smiths for the launch of the new CD of the show. It's an odd and amusing amalgam of music and education and theatre. It's centred on 1988 as the year of the first IPCC meeting, the creation of the Marshall Institute as the first climate denialist organisation and the birth of Chicago House music (which follows the "Disco sucks" movement of 1979 that led to subsequent House, Hip-hop and Dance music) althought the action takes place in our current Parliament House, on the hill here in Canberra.

In this incarnation, the theatrical performer and developer was David Finnigan and the DJ was Reuben Ingall. And this was controversial. After several attempts, Kill Climate Deniers won arts funding from the ACT Government for its development. The then ACT Liberal Leader (now working for a significant salary for Andrew Barr - funny, that), Brendan Smyth, complained about this, leading to an Andrew Bolt airing and subsequent verbal attacks and threats to David and others. All standard procedure for the small band of cultural warriors of the Right. David's legal opinion suggests protection from our terrorist legislation on the grounds of theatrical satire but this all remains a worry. So we laughed to confirm the satire. Laughing was easy, even if, in the story, the Climate Deniers win in the end. I won't recount the story, but it involves a terrorist plot on Parliament House featuring a super-heroic female environment minister and her PR offsider and a shock jock and new tech and helicopters and Fleetwood Mac (?). And some minor education in climate change. And plenty of loud music and laughs. Then to finish, a dance party. Dance Party? Sting once said "when the world is going down, you make the best of what's still around". I've pondered that very line as I write on jazz and the arts while climate threatens. I guess David's made a similar decision. So the dance. And the CD which essentially provides the text and original dance music from Reuben. David's presentation was both intimate and strong and well-voiced and Reuben's music was a loud, head-thumping pleasure. Local and unpretentious and great fun, made famous by Bolt and others, appearing in various formats. And referencing the essential issue for the modern world - the one we are busily flubbing.