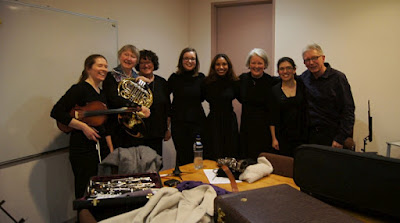 Chamber music is exposed and in the respect quite unlike orchestral music so I was a bit wary leading up to my first chamber concert with the NCO Octet. We were performing with a string of other groups at a memorial concert for Dr Philip Toua to fundraise for Clare Holland House at the City Uniting Church. But the room was glowingly light with concealed windows, nicely live with a reflecting sloped ceiling, the audience was inviting and the list of performers was intriguing and varied, so I enjoyed this. I learnt that English and Tongan congregations meet at this church, and the family was of Tongan descent, and this was an added interest. The performers included three Pacific island choirs: Peroveta Singers of PNG, the Tongan Youth Choir and the West Papuan Students of Canberra. All had a fascinating power of voice and at their best, inviting harmonies. Robert Schmidli turned up to play Bach's Chromatic Fantasy and fugue in D minor. Great work and nice playing. Canberra Choral Society presented three songs; very smooth and professional. Pip Thompson and Douglas Mcdougal of the CSO explored some repertoire for two violins, a few jazz tunes, but most significantly a Sonata (Op.3 no.6 D maj) by Jean Marie Leclair, after setting the scene with a bottled life history (a fascinating and sad story). As they volunteered, three of six of the Lord Byron 5 performed a few of Byron's poems as folk rock tunes sporting the best costumes of the day. Our group, NCO Octet, performed two movements of Schubert's Octet for Strings Fmaj with rather lesser costumes (all black). That went well enough. I enjoyed it immensely despite the exposure. Thanks to Geetha and family who organised the event and my band. A first exposure!

Good for you Eric. sounds like an interesting and fun experience. I think I've only been in that church once though it seems such a feature of Ciiv.