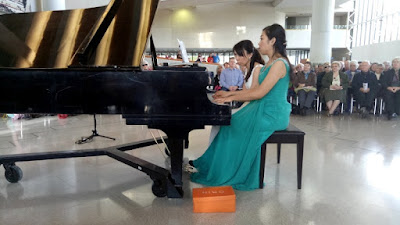 Two pianists, four hands, one piano. The Australian Piano Duo doesn't always play on one piano, but it can and did at the High Court. The APD is Vicky Yang and Maggie Chen, born in Taiwan, grown up in Australia, studied in the US and Europe and Ensemble in residence at the Con at Griffith Univ. A friendly pair with a very varied repertoire on the day. First up Schubert Fantasy Fmin, lovely, lengthy, a serious, traditional work. But then a diverse package. John Pitts Glittering gamelan with various noisy, clantering bits put in the piano for preparation, clincky and buzzy tones, performers' bodies spread one over the other to extend ranges. One keyboard can be a little thing, only 88 notes. I had a good view to see some fingers nestled under hands, digits avoiding others, I guess inevitable, but the physical stretches were unexpected. Then some interesting studies, I understand they were transcriptions by the Vicky and Maggie of Oriental folk songs. Then several Valery Gavrilin [Russian] Sketches and an end with Piazzolla Libertango (again with occasional physical contortions). I enjoyed the richness and added complexity of the four hands, was close enough to see how the structures and accompaniments and melodies worked with more parts, admired the unity that had melodies move from one hand to another player with ease and comfort. I guess one requirement is the ability to work so closely together, both physically and artistically. This felt comfy in both ways, if sometimes just a little amusing when one hand reached over the other two or three. Investigating further, I discover the Australian Piano Duo Festival, in its third incarnation in Qld, where this duo is based; an interesting coincidence. A lovely, satisfying concert by two players working very well as one.

The Australian Piano Duo comprise Vicky Yang and Maggie Chen. They performed at the High Court.
Posted by Eric Pozza at 3:41 pm