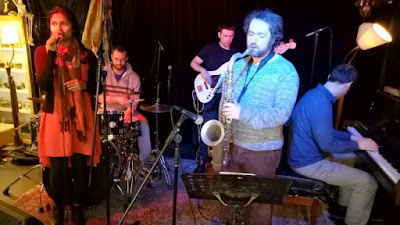 A new jazz jam session for Canberra. I have known of Sunday Sessions at Smiths for some time, but they've recently been taken over by jazz jammers. It was run short for another event this weekend, but I got there for an hour. These were some very good players. Hugh Barrett, convenor Josh Buckler, Jason Henderson and Mark Levers. Sitting in we Suhasini Sumithra, Andrew Howard and Eric Pozza. Mark likes it hot, so there was some pace here, not least Stella with stellar effort. Otherwise, standards like Black Orpheus, Footprints, There will never be another you, Beatrice, blues. Not surprising the playing was nice: Hugh plays sequences through dissonance with ease; Jason is an army reserve player, big chops and well versed; Josh is quick and clever in his lines and melodicism; Mark was just driving it hard; Sumi sang a lovely Manhã de Carnaval / Day in the life of a fool / Black Orpheus. Nice company and good fun all round. I got to play Beatrice and Stella on speed. Thanks, great fun.