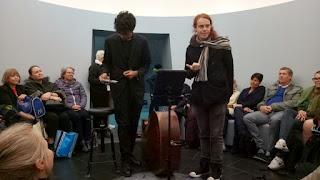 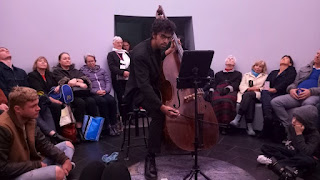 This was just a short concert, inside but not, exposed by a diminutive Pantheon hole-in-the-roof, but the seats were heated and the music was experimental but interesting and well played. Written by one bassist / composer, Ben Drury, and performed by another bassist, Rohan Dasika. This is a formidable pair. Ben is busy around town with experimental music. Rohan is up from Melbourne to play again for the CIMF after time with the Australian Institute of Music and gigs with the MSO. The concert was solo, fairly short (15 mins?), timed for sunset so catching the changing colours of the evening, repeated each evening M-F for this CIMF week. The techniques are unconventional and the bass was prepared - at least I thought I saw balls of blutack on each string at the end of the fingerboard (otherwise it was hidden from my seat). First up was bowing the tailpiece which gave a surprisingly strong tone, accompanied by various sung notes, presumably at composed intervals, from Rohan, then heavy rhythmic bowing above the bridge, then bowing strings high on the neck above the left hand while the left hand is stopping strings into the thumb positions. This probably required the dobs of blutack and gives a strange effect as fingering higher up the fingerboard produces lower tones. All strange, but this is experimental. Rohan did a great job, playing effectively and treating music and environment with respect. Ben's musical sounds merged nicely with the setting. I looked around and all were watching the hole in the roof as the light and clouds changed. I'm not sold on Turrell's work - excellent construction (the perfect water edges and laser-like hole-in-the-roof display the superb construction work) but the structure just seems to borrow its beauty from nature. But it's popular and considered a masterwork and often used for music and has heated seats for listeners, so OK. I liked the music. Well done, Ben and Rohan.

Rohan Dasika (bass) performed a solo work written by Ben Drury (composer) at the Turrell Skyspace at the National Gallery of Australia.
Posted by Eric Pozza at 1:37 pm