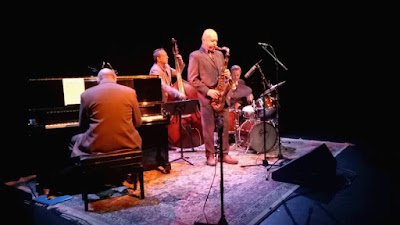 It's not too often but sometimes you hear players that can just play, they are just hot. It's not the first time that Joe Farnsworth and Brendan Clarke and mates have been here in Canberra, but I'd forgotten the drive and sheer energy of it all. The chops. They did two sets but just a few tunes: The night has a thousand eyes, Along came Betty, Moments notice and a bass solo (evidently dropped on Brendan without notice: he played free then Beatrice). There's good feelings here, especially from home-towner Brendan who's full of mates in the audience. And there's that jazz improv, in program as well as playing.

They have short chats between tunes to decide what to play, perhaps some instructions, then into playing so capable you wouldn't know it's not heavily prepared. But of course it is: as Bird said, practice for hours then forget it all and just play. And this comes to jam-like invites, too. So Sophie Edwards, who had played with the band last year, sat in again for Corcovado and Wayne Kelly was up to play a Monk tune. All seat of pants stuff but great when played with guys like this. The second set was mostly a Coltrane medley: Afro Blue, Naima and Blue Train. They joked about a train wreck but of course, despite some uncertainties, the playing was a dream. Lots of energy, lots of adventurousness, lots of deep-rooted swing. Then a drum solo, written by JF after visiting the Australian War Memorial last time he was in Canberra: rudiments and military-like, memorial slow-march flams. I love that American marching-band influenced, rudiment-rich drumming. And out on C-Jam blues. John was more reticent, considered player; thoughtful; Dale the determined hard-bopper with huge fluency and tone; Brendan the mobile and incredibly swinging bassist; Joe the pedigreed drum-master with an impressive list of sideman calls and big ears to his colleagues. Just a display of immense chops and determined swing for some of the most competent and purposeful hard-bop that I've ever heard. As for Brendan, Clarkey's our local mate who pulled all this together.