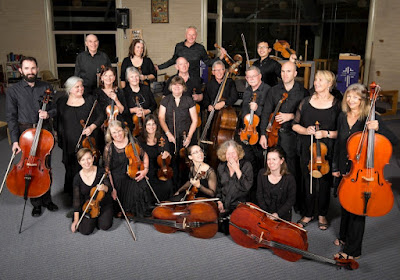 This one was exciting and a challenge. I'm filling in for Juliet in the bass seat in Musica da Camera and this was the first concert for the year. A program of Italian baroque led by a baroque specialist Bianca Porcheddu of the Australian Brandenburg Orchestra. Musica da Camera is a string orchestra of about 25 players formed in 1979, so it has a history.

It invites various conductors or leaders for a range of programs. Coming concerts are a mix of favourites, then ancient and modern, then classics and new-classics, so the repertoire is varied. MdC includes some professionals, from CSO or teachers, and some serious instrumentalists, so it's a worthy challenge. This concert featured famed names, like Handel, Vivaldi, Corelli, but also lesser knowns, Albinoni, Geminiani, Valentini and one I'd never heard of, Dall-Abaco, with a range of styles, ground bass with variations, a few concerti grossi, extra violin parts (4), canons. Bianca had us in fear ramping up the speeds in practice, but had some generosity on the day. The room was full, the group played with verve and life that a bit of performance nerves brings out in you and Bianca did some lovely little fills and led with professional litheness. What slips there were were covered well enough and we left feeling satisfied with the performance. 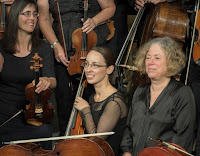 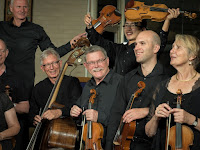 Thanks to Bianca, of course, but also to a great group of musos with considerable application to an ambitious program. We're not releasing our CD yet, but we are preparing to take on a piece written by Elgar in 1905 to highlight the virtuosity of the new London Symphony Orchestra. Mmm. Thanks to all. BTW, I was too busy for pics so I feature some a few from our photoshoot.

Musica da Camera was led by Bianca Porcheddu (violin) in a program from the Italian baroque.