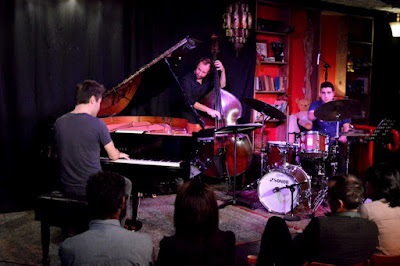 It takes a flit from ACO/Branford Marsalis to Smiths to realise the jazz in your soul. This was my last outing with Dan Tepfer. He was playing a jazz gig for CIMF at Smiths with top flight Australians Sam Anning and Alex Hirlian. The place was sold out and I was recording so I had to get there early. I heard them warming up and was already excited. They had played a few gigs together before this (Brisbane and Wollongong?) and they were hot. The music was mostly original from Dan's trio's latest album. The room was full and the CIMF had trucked in a Yamaha grand in good nick and capable soundman Bevan was on duty.

Then the gig. From the top, this was intensely complex rhythmic outings with fabulously effective solos all round. I tried to count a few with no luck but saw some charts later and it wasn't impossible, although rich in sixteenth-note syncopations through changing time signatures, 7s or 11s interspersed with more common 4s and 3s, perhaps changing each bar. Not impossible but a difficult read. Very heavy on time and groove. And chords that implied rather than defined. Something like E-4b7 (not even sure how to write it!) mixing with other colours of E-7. Odd extension that, 4 not 11? The grooves were steady and hard often fast, strongly defined by both Sam and Alex but free for accents and embellishments as they desired. Despite the writing there was considerable freedom. Also a friendly and respectful eye from Dan. He obviously enjoyed this group. He mentioned he'd studied with Sam at the Manhattan School of Music. There's no way this would have been out of place in the Village. Dan has studied (astro-)physics and it shows in his variety of musical interests (Bach, Disklavier and contemporary jazz). I've since read he has more music and science in his family background. The room was full with an older cohort, this being a CIMF concert, but the band was absolutely well received. They ended on a softer note, some non-originals and tamer times and a ballad. Set 2 ended with the driving original, Roadrunner, and an encore of Everytime we say goodbye. I went away stunned and hugely pleased and aware of the jazz in my soul. Something of this quality would thump the heart of any listener. A stunner and a great pleasure; being Manhattan, I can say world class.

Dan Tepfer (piano) led a trio with Sam Anning (bass) and Alex Hirlian (drums) at Smiths for CIMF.
Posted by Eric Pozza at 10:00 am