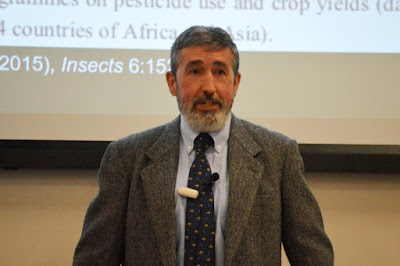 They are coming like blowflies, if only blowies were around like they once were. We're bombarded with end-of-world warnings. Just listen to shock jocks and they are complaining. And Angus Taylor. Trouble is, it's the scientists making the warnings now, and er, they've been somewhat right in the past and, like, physics has laws, and er ... time to fret. This was an update given to Canberra U3A by Francisco Sanchez-Bayo, variously over time, of USyd and various lectureships and doctorates and the rest. It was basically a report on his paper, published this April, reviewing a string of peer reviewed publications on declining insect populations. It fits with various warnings on the sixth great extinction and the parallel issue of climate change. NYT Mag had a nice summary that was mentioned. Then, of course, there was the IPBES Global assessment report saying "1,000,000 species threatened with extinction" amongst other comments. Read this and more(from reputable sources, of course) and you'll know more, but what did I learn? That entomofauna are insects; that insects are rapidly declining in numbers and biomass; that this decline is recent (we saw a graph of the US bee population decline starting in the 1950s, coincidentally with DDT); that "the planet is doomed without insects" for insects provide tons of essential services to humanity and to the rest of life on Earth (specifically pollination, nutrient recycling and food sourcing); that China doesn't have bees now and pollinates by hand (presumably with lots of very cheap labour); that studies show annual declines of ~2% (eg, loss of insect biomass in Germany 1989-2016 was 76%); that extrapolation predicts only 1% of insects will survive 100 years from now; that it's now often less healthy to live on a farm than in suburbia, due to chemicals; to top it off, that Integrated Pest Management, which uses lower rates of chemicals, is more productive. And the reasons for insect declines? FSB listed habitat loss, chemical pollution, biological factors and climate change. The main cause is identified as habitat loss through subcauses intensive agriculture 24%, urbanisation 11%, deforestation 9% and wetland/rivers changes 6%. And chemical pollution accounts for 26% including pesticides 13%, synthetic fertilisers 10% and so on. I didn't get all the figures and can't be bothered recounting them all here. Go to the primary sources (below). But suffice to say, we are in a pickle for insects as well as the rest of life and climate and for civilisation. Insects are OK and necessary, but I fret mostly for us. Like Greta says, "I want you to panic".

Francisco Sanchez-Bayo spoke on the worldwide decline of the entomofauna (insects) to U3A Canberra.