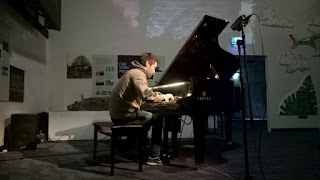 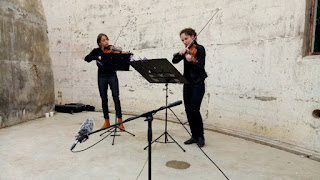 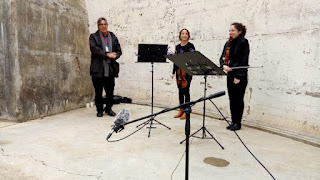 We were "on the mountain", meaning Mt Stromlo and it was bitter cold. It put a freeze on virtually all the music, even inside but particularly in open domes and on an exposed hilltop. This was one CIMF event that demands little walks between venues and offers diverse performers. This is a seriously varied experience and for that it was very good. I ignored the cold, as best I could. For my group, first up was a welcome from astronomer Brad Tucker and some genuine, original, 1930s, 78rpm recordings of Albert Schweitzer playing Bach on organ (saved from various Stromlo fires). It matched with a few other pieces of Stromlo trivia, not least a photo of observatory director and wife, Geoffrey and Doris Duffield, toting a double bass to play in their Stromberra Quartet (sometime before his death in 1929: you can still find his grave on the mountain). And in contravention of CP Snow's two cultures, Rosalie Gascoigne, artist of found materials, who lived on the mountain from 1937 with her astronomer husband, Ben. Then on to the first major performance which happened to be an Australian premier. This was Dan Tepfer, NYC jazz pianist. He played his work Natural machines on Disklavier. Disklavier is the digital player-piano made by Yamaha. Dan played with the automated Disklavier performance. Dan's website describes the process. In summary, his improvisations are processed and responded to through Dan's pre-programmed computer, so Dan leads but also follows, both musically and through an artistic projection of the playing. Fascinating and very nicely played. He played, perhaps 4 movements, and one without the computer interactions. It had some audience befuddled, Disklaviers not being so known or understood. Truly a work of future thinking and artistically satisfying. Then on to the open Yale-Columbia dome. The two violinists were fretting about the cold (understandable: 11degC but a cold wind so ~4degC apparent temp) but played a worthy set anyway (I did wonder how!). This was the World premier of Mike Dooley's violin duet The Heavens declare. As I remember, three movements with a first movement divided into parts (inviting some untoward clapping); several passages of bowing against pizz; a slower middle movement and lively final. A lovely work and one I'd be pleased to hear again in more comfortable circumstances, for audience and players. The work was played by two members of Quatuor Voce, Cecile Roubin and Sarah Dayan.

Dan Tepfer (disklavier) played compositions from his Natural machines collection and Cécile Roubin and Sarah Dayan (violins) played a violin duet by Mike Dooley, all at St Stromlo.
Posted by Eric Pozza at 11:17 am