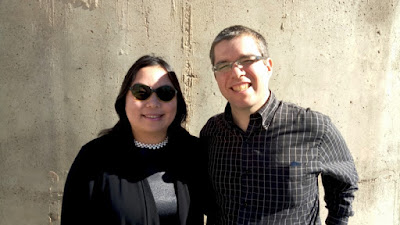 Edward Neeman is faculty at ANUSOM and I got to his faculty recital in the Larry Sitsky Room after SS4CC. It's a very different experience after a demo, but not out of place, somehow, given inter-American tensions. This was entitled Piano music from Latin America but it was a rich range, including mid-20th century American (meaning USA) music. Five pieces, four played from memory (a feat of which I remain in awe), one piece written by the composer for Edward himself, some dark, some rhythmical, even boogies and shuffles and stride, pieces all played with great commitment and immense dynamics. To me it's obscure, but perhaps not to Latin Americans. Edward told a story of Lecuona as Cuba's Gershwin: while US kids don't know of their Gershwin(s), Lecuona is renowned in Cuba. The composers were Velazquez and Lecuona and Pinera (the piece written for Edward) and the Americans Beech and Schoenfield. The classical Cuban rhythms are nothing like the jazz feels but are there for the hearing and the modernism can be disjointed and richly complex, so not for the fainthearted but wildly impressive and plenty challenging. A great outing.

Edward Neeman (piano) performed a free faculty concert at ANUSOM. The pic is Edward and Stephanie (also a concert pianist) Neeman encountered at CIMF2019 the following day.
Posted by Eric Pozza at 10:43 am