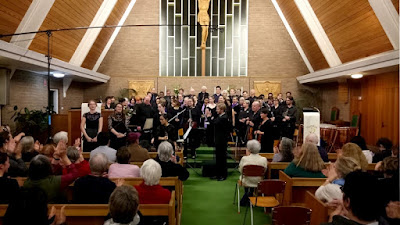 We were celebrating the day after the election ... at least the death of Queen Mary but also her birthday and, I guess, Jesus. This was SCUNA, the amusingly named choral society hinting at inebriation, and they had their orchestra (virtually all players from NCO) and two solo singers, soprano Veronica and mezzo AJ under Lennie. The tympanis were out for the renowned and hugely memorable funeral march. I'm told the tymps were added later and this arrangement was used in the renowned '70s film, Clockwork Orange. "He cometh up and is cut down like a flower" / "of whom may we seek for succour" / "who for our sins art justly displeased" / "deliver us not into the bitter pains". It's a heavy feeling. This was perhaps the most intense and stunning work but not the Gloria of the program. That was Vivaldi's. First half Purcell with the Queen's funeral march and Come ye sons of art, written for a birthday of Queen Anne (royalty was presumably good for commissions; these days I guess it's the mining industry) then Vivaldi Gloria in D major after interval. So a generous program to raise the spirits or, with QM, to delve into depths. Glorious music throughout. The two soloist vocalists were great and fitted neatly together in duet passages. I especially enjoyed AJ's solos. The choral singing was generous and the musical passages nicely presented. Evelyn on cello was busy and did a particularly satisfying job. Lenny led it all and even doubled on trumpet at one time. I know of harp and carillon and he was toying with a violin in the break. What else does he play? So, a great comedown from election weekend. Who needed it?