In a variety of ways 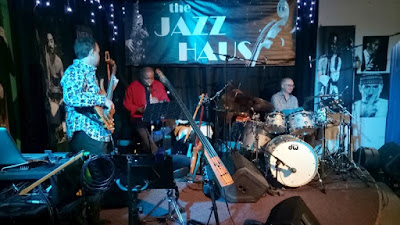 It must be the era of odd combinations and I was intrigued. This time it was drums and two basses: our local bassists Eric Ajaye and John Burgess with visiting Melbourne drummer David Jones. There's history aplenty here. David and Eric played together in Melbourne twenty years back, presumably before Eric's move to Canberra and ANU and Eric taught John at ANU. They are all strong, inventive players and this was the opportunity to improvise.

Improvisation it was: John and David had just met in person that afternoon. But that's jazz. But even so, the traditions appear in some shared musical themes. I think Footprints emerged twice and the funk of Freedom Jazz Dance featured and the opening was In a silent way. And amongst the open, free improv, there was written music, David's Ancient echo and Eric's words, you'd probably say rap, written by him as a schoolkid to Freedom Jazz Dance. We got to sing along a phrase with that. The variety of basses, too, was fascinating. Eric's smooth, lithe, sliding, often funky lines on two e-basses and an NS stick. John's sharply clear grooves and melodies on his two e-basses and the electronics on his bowed NS stick and more. Against this, David's immensely satisfying, sharp rhythms and virtuosic, unexpected three- and four-feel fills and interjected tones from various bells the percussion. How sharp! A few drum solos that floored the audience and a tunes played on kalimba then expanded to the two basses. There were two sets of this, knowns and unknowns, all immediate and personal and exploratory. Intriguing with that edge of adventure from the unusually deep tonal blend and the electronic extrapolations. Another rare instrumental combination and a great pleasure.

Freeflight were Eric Ajaye (bass), David Jones (drums) and John Burgess (bass, electronics). Simon Mitchell (art) was sketching but the pic didn't catch his art.). Thanks to jazz regular Bob Howe for the pic of authentic Jazz Haus illumination.
Posted by Eric Pozza at 9:36 am