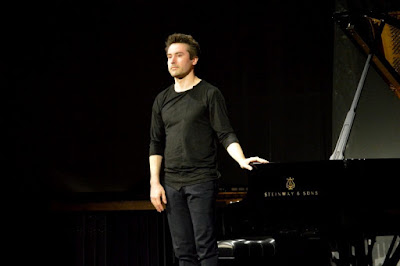 It was pretty shoddy planning but also just a concurrence of opportunities that had me with with three concerts in one evening after an afternoon orchestral practice (a playthrough of Wagner, Beethoven 4 and Saint-Saens; I took leave of Dvorak 8!). But then the professionals. First concert up was Dan Tepfer at Fitters Workshop playing his Goldberg variations / variations. The original Bach variations are an aria start and end sandwiching 30 variations, sometimes technically described as in canone all terza or fughetta and always written for two manuals on a harpsichord. Dan had a long association with the Goldberg and has finally created a response consisting of an improvisation for each of the 30 variations. So we hear the introductory aria, then a first Bach variation then a Tepfer improv then Bach then Tepfer through all 30 to the final aria repeated. In all, about 90 minutes, played with no music and improvised on the day (if probably conceptually established beforehand). I loved it deeply. Bach, of course, is a thing of wonder. Dan's responses were full of tonalities and harmonies and rhythms that have grown from another 300 years of fine music and jazz and more. There's clarity and order and dance-like joy in Bach; there's groove and dissonance and polyrhythms and substitutions since. So, the improvs are vastly different but built on the essence of each of the relevant variations and influenced and respectful and intellectually outstanding. A few people I spoke to preferred Bach or even suggested he could have left the improv out but it was a work of sublime depth to my ears. I chatted to Roland Peelman later and he agreed: if Bach was around that's what he'd be doing now, respectful and knowledgeable of the past but totally cognisant and involved in the present. Fabulous work. You can hear a take of it on streaming services as Goldberg variations / variations, but it can never be that performance, that day. That was fabulous and is passed.