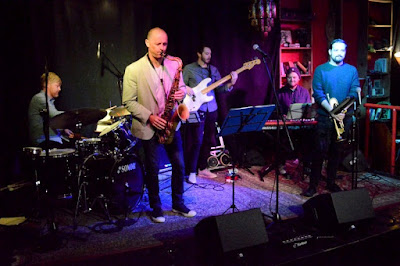 What of a CD release by Jamie Oehlers? He's a supremely exciting tenor player, renowned for prizewinning and now just extravagantly virtuosic and writing great material. He was joined by Ben Vanderwall, a deliriously fascinating, busy, intriguing drummer, always ready to explore percusson sounds and deeply polyrhythmic when he chooses that or rabidly funky too. The other three were unknowns to me (other than Ricki Malet who I'd seen in a big band context) but they were wonderfully satisfying.

Bass Zac was all deeply funky syncopations on a PB, playing with fingers or thumbs for that thumpy dub sound. Ricki was a great pleasure on some demanding heads and satisfying solos. Harry was playing Nord but it was all Rhodes tones and perhaps ring mod, absolutely the part for this sound, widely different from the abandon of Jamie but also so suitable as a contrasting style, two hands widely spread across keys, chordal left hand and richly arpeggiated right. Not music for the fainthearted, though. This was very complex and hence demanding but a huge source of pleasure. Style and preferences differ but the best stands monumental. This was fabulous. Drummer Mark commented that Ben is the best and world-worthy (the drummers were obviously awe-struck) and that the difficulty in his playing is not obvious. Not sure I agree. I was basking in drums and sax and speculative keys and deep grooves and trumpet and intrigued by the ease of it all, those grooves, those intricate rhythmic embellishments, those odd syncopations that sat so deeply, those rich, delicate phrases that came so easily but demanded such harmonic wit. What else to say when you hear such stuff. A blast.