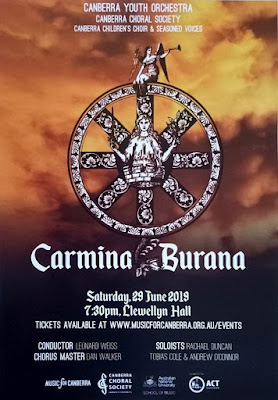 I've enjoyed my last few years playing in orchestras but I really thought I'd left my run for the Canberra Youth Orchestra a little late. But no! Last night I played with CYO in Carmina Burana! I joked about that with someone and they commented on the interchangeability of orchestras in Canberra. Perhaps because we are a smallish community where people have common connections and are physically mobile and flexible. Also that we are pretty well endowed with classical opportunities. I hope this lasts. At least last night, the complete viola and bass sections were friends or alumni. And they often just drop in at the last minute. I only sat in Friday night and Saturday morning before the performance on Saturday night. But it's quite readable for bass and I'd played it before. Not sure the singing was so easy. Canberra Choral Society provided most of that and they performed a treat. There were less frequent kids voices from the Canberra Children's Choir and some accompanying aged voices from Seasoned Voices. That was fascinating: the two ends of a singer's life represented in these mediaeval words put, fairly recently, to music (Carl Orff wrote Carmina Burana in the 1930s using mediaeval texts). Plus there were solo singers, soprano Rachael Duncan, tenor Tobias Cole and baritone Andrew O'Connor. They impressed massively, not least Rachael's glorious and touching resolution with the endless (8 bar+) sustained high note and Tobias' black boa and matching theatricality. The choir had been prepared by Dan Walker and he sang amongst the tenors. Otherwise, there was the CYO itself with its friends and alumni. Great job by them and all. I sat by the percussion and they were wondrously varied and sharp. The winds did a great job with their features. The basses done good, too. I'm pleased to notice my own improvement over recent years. I played CB with NCO in July 2016 but I felt far more in command this time. That's a personal satisfaction. And again Lenny is passing a baton: this was his last concert with CYO before going off to study in Baltimore. And perhaps just one oddity to mention: a classical concert with no interval, just the uninterrupted Carmina. This was a great pleasure and a wonderfully evocative and successful rendition of this popular classic.