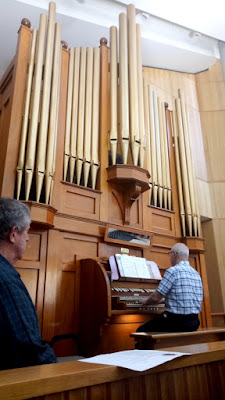 It really wasn't as difficult to achieve as I'd made it (I could have just emailed), but it was only recently that I got my name on the RSCM ACT Branch mailing list for their monthly concerts. The RSCM is the Royal Society of Church Music, its Australian incarnation, and there's a branch in the ACT. They run an monthly lunchtime organ recital series around the church organs of Canberra. This one was David Franks playing Buxtehude, Bach, Wesley and some 1950s compositions from Sumsion and Bush at the City Uniting Church. The organ is a Geo. Fincham & Sons dated 1925, originally for St Andrew's Presbyterian Church, Goulburn, installed in its present location in 1988 by David Hudd and rebuilt in 2011 by Australian Pipe Organs. I've found that church organs commonly have histories like this, often moved from church to church with openings and closures, and Fincham is certainly a name I've heard often. For lists and descriptions of organs, see the Organ Historical Trust of Australia site (below). The turnout isn't vast but the pleasure is certain. This wasn't an organ to blast with deep bass pipes, although we did hear the pedals at times. But it was pleasant, each work was informatively introduced and the playing was informed and duly capable. Various preludes and fugues and chaconnes and dances and ground bass with toccata flourishes above. David has a string of qualifications up to Trinity College of Music, London, and a matching string of performances on various organs through Sydney and beyond. Organists have to move, but the flip side is they experience diverse instruments. It reminds me of a jam session I used to attend. I experienced so many nice and different e-basses until I realised I was expected to bring my own! But a huge pleasure while it lasted. As was this: a great pleasure to hear the music and to discover another organ.