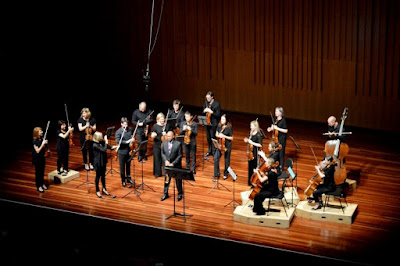 Second in the concert marathon was a biggie: Australian Chamber Orchestra featuring Branford Marsalis playing music of Villa Lobos, Piazzolla, Ginastera, Stravinski, Golijov and Sally Beamish. Is SB the one out here? She's extant, she knows Branford and it's him playing on my Spotify recording. It's not often I leave a concert at interval, but this time I did. The musicians were great and the music inviting, especially the Piazzolla (if of a theme, as Piazzolla sounds to me ears). Branford opened with a short Stravinski clarinet solo on soprano sax, then a Villa-Lobos fanstasia, then Satu Vänskä led for Piazzolla Four seasons of Buenos Aires. All fabulously capable playing with strings that just sat in easy consensus and just a few ensemble features - I particularly noticed some prominent bass and a fabulous cello solo. Satu's lithe playing was a huge pleasure. Branford was his professional self but not so exciting for me in this setting. But I was recording the next concert so I left at interval to get suitable seating, given the smallish room that was sold out. How can this be? Leaving ACO and a Marsalis at half time? Odd but great while it lasted.