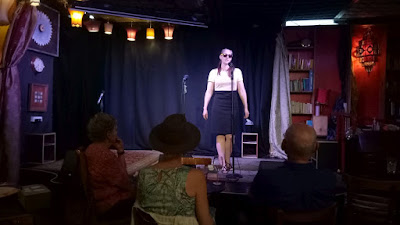 This was something new.  I had attended one or two Geoff Page poetry readings but not the local scene like this.  It was called That Poetry Thing, at Smiths, hosted by Penelope, open readings by whoever volunteered.  My offering was Double down, a spoken-word track from my Pumpkin discomforts / The Pots recited as poetry.  There was at least one other musician reciting (Jack recording as Small Town Alien).  A few other recited published poetry by others, but mostly it was original.  Laurie amused with a simple repetition of double not necessarily being better than the half until he gets to age (he wasn't young!).  I was sitting with Laura who presented an improvised poem, perhaps recorded only in my pic, I guess.  Powerful.  There was considerable amusement over mic management, cleaning and coddling.  Inevitable and obvious and  suggestive if not particularly noted.  Each presenter had 3 minutes, but this was casual.  Mostly they read one poem; some two or even three short ones.  The audience was warm and open and accepting.  Aaron finished with a lengthy bureaucrat-tease on climate.  Amusing but frightening.  Lois and Janice read; Bosco recited about a waterfall; Robin on revolution; Izzie (?) on the Telopea Park High School Band; Audrey and Louisa and Sarah and Audrey; not sure who was the Two cars canoodling but it was a corker; one was inspired by lust, perhaps more?  Excuse any missed names.  Most read; a few recited from memory; one or two improvised.  There was humour and seriousness and rhythm, rhyme and not, so various in style and approach and topic but always of interest.  A pleasant and intelligent and welcoming night.  Recommended.

That Poetry Thing was a night of open readings that happened at Smiths.

Email ThisBlogThis!Share to TwitterShare to FacebookShare to Pinterest
Labels: poetry, That Poetry Thing

Sounds very enjoyable Eric. Were there any in the audience that were ONLY spectators or did all audience members contribute?

Sue, Happy New Year! Yes there were perhaps 20 people who didn't present. Some of those had spoken before. I guess it becomes like a club overtime. They seem to meet regularly.