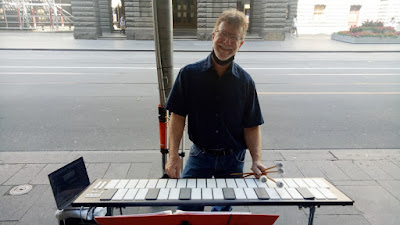 This was in front of the Town Hall in Swanston Street.  Quieter but just as small a world.  One busker playing tuned percussion.  We chatted.  I mentioned Canberra.  He’d studied with Gary France and taught Chris Latham in universities in the USA and played at a few CIMFs.  He’s now settled in Melbourne.  He finds it’s improving from when he arrived early this year (somewhat with the arrival of Covid and lockdowns!)  He comes back to Canberra every now and then with his wife who tunes pianos.  He was playing a Pearl Malletstation that he’d bought from Gary.  I liked what he was playing.  Professionally understated and relaxed and richly coloured with key changes.  Nice.  It was from a musical he wrote in the States.  All a great pleasure.  Cheers to JB Smith.  Nice to meet, and hear, you.