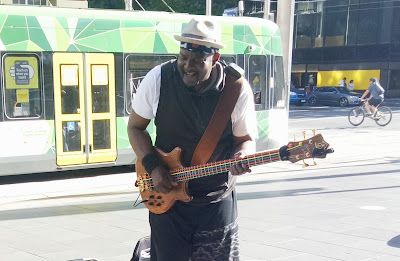 You needn’t go to a gig to hear some pretty smart players in Melbourne.  Victor Wooten for one.  I was chatting with Wylie J Miller, a pretty stylish slapper himself, sporting a 5-string Stanley Clarke signature Alembic.  He was surprised someone recognised the Alembic. Apparently, VW had sat in with him one day when here in tour.  These are those wonderful stories that are true but become mythical.  I was a little dumbfounded to hear it, but not surprised.  He was doing a wonderful job with deep grooves, natty singing to accompany it and a wonderfully entertaining presence.  And he had a nicely worn Alembic to share.  But I’d seen a few others over the days and they were all impressive.  Bianca Ivorie was a singer songwriter with a decently strong voice and convincing songs.  One song she noted was Ex’s and Oh’s by Elle King, once a hit and an in-your-face feminist statement in one.  Nice one.  But she writes, too.  There were a few violins another day.  Cam Nicholson looping a modern set with various effects.  There’s a nice one of him on YouTube playing the whole of Pachelbel’s Canon with looped parts.  Loops really are the stuff of modern busking.  I think it was Dario Zhang standing by.  I saw Dario later playing against recorded or digital accompaniment.  Not sure if it’s just for Covid, but they all perform in taped off boxes, obviously approved by city authorities.  Busking ain’t what it used to be (it’s actually often much better).  They are all on YouTube if you wish to follow up. 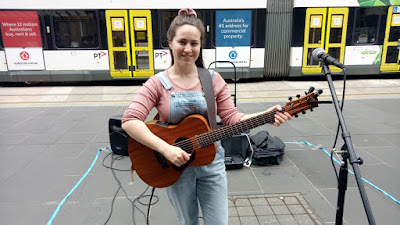 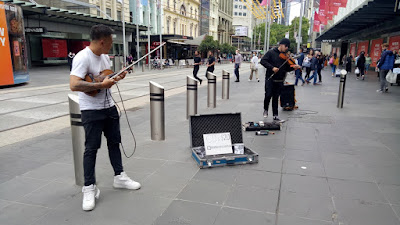 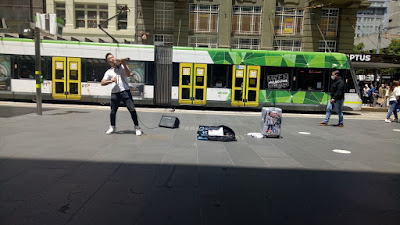