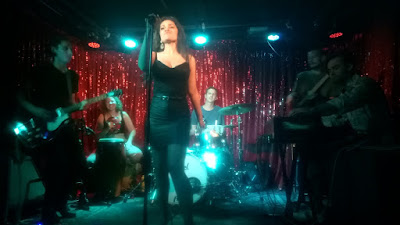 There was a time when Miles had to justify that he played funk.  So I guess on a jazz site I don’t have to do that anymore.  I went to hear a great little funky soul band last night called Fulton Street, in Melbourne, at Cherry Bar.  Fulton Street is a sextet: tight, inventive, deeply funky and virtually all original.  They dropped into Midnight Oil for a little interlude (The power and the passion) but otherwise this was all theirs.  But that was not what got me; after all funk is mostly a few chords and I couldn’t catch most of the words anyway.  But these guys are trained and it shows.  The grooves are deep and authentic; the players look to each other, perhaps playing minimally and repetitively, but the parts fit together key-in-lock into a satisfying whole.  That’s how funk works, of course.  The players just play, and the singer, bless her soul, is soulful, as in singing but also dancing, moving, grooving.  So the torso bends and the arms raise and the fingers flit.  All as it should be and wonderfully satisfying.  It’s not jazz, but the knowledge is clear enough (they are all trained, at least several completed music degrees and some advanced studies here): the awareness of interaction and the trained accuracy of interpretation are obvious.  The bass was finger happy and lock tight.  The keys playful and expressive.  The percussion aurally present and enlivening, playing with drums as a locked pairing, often sparse, always decisive.  The guitar light and choppy and responsive, as this interplay of parts in 16th note syncopations should be.  Spacious and relaxed but also taut and tight; insistent, then suddenly quiet to await a delightfully precise return.  They liked that and so did I.  I bopped with the others on the floor, standing, listening, intrigued and whooping often enough.  Great fun, great grooves; nice stuff.  This was Fulton Street’s return from nine months of Covid interruptions and it was a blast.

They sometimes expand with horns, but this night Fulton Street were Shannen Wick (vocals), Nate Scott (guitar), Jamie Stroud (bass), Andreas Miculcic (organ), Laura Kirkwood (percussion) and Daniel McKoy (drums).  They played at the Cherry Bar in Melbourne.  And, BTW, the instrumentalists have recorded as Dive Team 5.  Have a listen on Bandcamp.