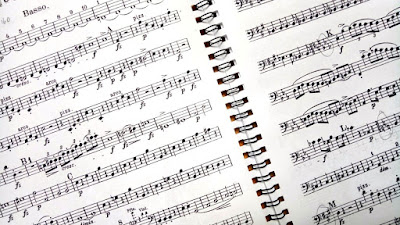 The classical equivalent of a jam session is a play through, I guess.  I was asked to cover for a session playing the Trout last Thursday evening in someone's house with just family and dog as audience.  The request just came on Thursday morning so I had a sight read at home with a recording and revisited a few of the harder passages that weren't such easy reads (not least a lovely jazz-like diminished run).  Then the run through that evening.  The musos were very capable.  We got pulled up a few times, repeated a few other times (I was responsible for some of each) but mostly it worked well (perhaps only in my "good enough for jazz" hat).  I was happy because I should know the Trout.  It's one of a popular few chamber pieces with double bass.  Two similar others were mentioned: a Beethoven septet and a Schubert octet.  I've played each of them, as I had the Trout, but a regular run through wouldn't hurt.  And then a chat and a drink.  First bowing for the new year and with such a capable crew.  What a treat.  Thanks for the invitation.