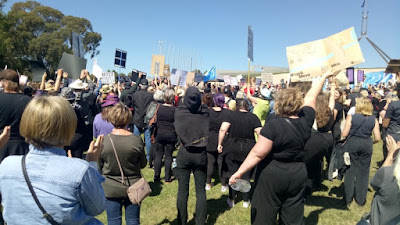 You have to hand it to the LNP Howard and post- that they offer plenty of opportunities to protest.  It's strange when they actively do so little (think ScoMo's winning but scant policies for the last election).  Hopefully our voting public is putting 2-and-2 together but I don't have great faith.  How do they do it?  Stay stubborn, refuse to budge; let issues pass over with a 24-hour news turnover; blame others, training the public to see both sides as the same.  With a little help to and from various friends.  Issues?  Women and secret trials are those today, meaning this 24-hour cycle, but there are others: climate-coal-gas, refugees, reconciliation, water.  Or the sheer incompetence despite claims of superior economic management: NBN, subs, EVs, renewables.  Or wayward ways which are increasingly frequent and ignored: sports rorts; water rights, GBRF; Manila; the Clover Moore fake doc; $2k per month Internet; French and Italian Au pairs.  And the endless secrecy: on-water matters; national security; Commercial in confidence.  Even non-legality: Robodebt.  The list goes on.  And everything a tax, or every job needs saving, except when it's not what their mates want, then they can be mashed.  Oh, I get angry, so I need to do something, so I go to demos, FWIW.  Two this day: Assange and Women.  It can be satisfying, if frustrating; hope-laden, if unlikely to bring change.  I despair on climate, anyway, so I fully expect existential dangers just around the corner.  No not next week (if you ignore fires or drought or floods or storms or lost GBR that are with us now, but those we can, partly, recover from ... for now) but unrecoverable within decades or a few centuries.  You don't win an argument with physics, but our stubborn government is doing its darndest.  Silly, short-termist and woefully unethical.  Even exporting our climate heroes (?) to the OECD (oh, what of his new words of climate commitment?  I say "know them by their actions, not by their words").  But at least with a day of demos we can gather in hope for a while, sometimes, and this government offers us many reasons to demonstrate. 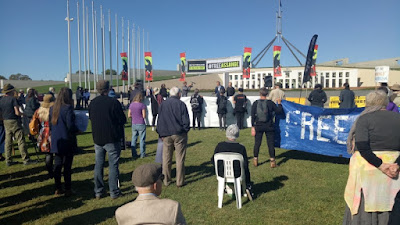 The Assange demo was small and grey and much the same crew spoke as last time, and as cogently as last time.  Bernard Collaery (himself subject to a questionable and largely secret trial) touched me with a lament on a country changed since his youth asking "what country will Julian return to?".  As for the Women's March4 Justice, it was big and impressive and black (people were asked to wear black) and angry and had some great posters.  ScoMo may ignore Collaery/Assange but I feel this is a much closer and bigger danger for him.  The question is, will his deceptive lightweight PR-spin still work.  My guess is the public is starting to see through it.  But maybe I'm wrong.  We'll see.

HomeRun4JulianAssange and Women's March4Justice were staged at Parliament House, for the first day of the new session of Parliament.