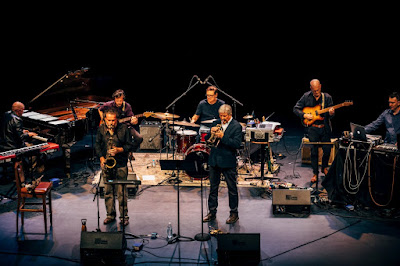 I'll put it down to a matter of quality and quantity.  I am wont to feel the width, but my recent CJ posts have been infrequent after a total blowout at the last (classical bass) concert.  But John Mackey's Melting Pot playing his Wave Length suite was fitting as another blowout.  It was fabulous and I was in awe.  John had described it as an improvised series of movements based on skeletal scores and influenced by Covid. I heard a series of tunes with rock-based grooves (think '70s Miles) and nicely twisted heads with plenty of space for blows.  There were some floating segments, perhaps with electronics or glorious piano chords from Wayne, some ecstatic outbursts from Greg and wonderfully and reliably tuneful, melodic statements from the front line of John and Miro.  They can both explode with a flourish but openly spell melody and play with various degrees of dissonance at will, and that interplay can be blissful.  Miro's harmonising to John can be a thing of great beauty.  And they both played with an octaver or harmoniser to sound all the world like synths.  And there was electronics there, too, with Mark standing at a bench of electronics, perhaps a keyboard (not sure) but definitely a laptop with looping and more (probably Ableton, I guess).  Mostly it was lost to the audience but between tunes and in some floating segments, it was evident.  Greg had a laptop, too, but not sure how it was used.  He had a string of pedals at his feet, so not just for effects.  And the core of the rhythm section was Lachlan on his Bass 6, that unusual 6-string bass that I remember as a remnant from the '60s.  He plays with thumb-pick and finger-picking for some fabulously embellished rhythmic grooves and extensive solos.  It's a different, virtuosic approach to bass, both grooving and thrilling at once.  And Mark, Sir Mark of the late intros, just a gem with the most supple stick control creating glorious, sweet tone and endless insistent driving grooves with nothing out of place, no embellishment ever indulgent, just perfect, never erring.  Mark was way on top in the mix that I found not quite as I'd expect, with Greg somewhat lost or indistinct, as too was Lachlan (but bass is hard to clarify), as even were John and Miro although Wayne seemed to be there, crisp on grand piano, when I turned my ear to him.  Perhaps a function of where I was seated?  But I quibble.  I enjoyed this concert deeply, the playing was outstanding, the heads were a great pleasure and there was joy and even some fun, and that glorious snare-on-3 drumming throughout.  So, quality or quantity?  At least for my last few CJ outings, the call is outlandish quality!  BTW, I chatted with Mark and Greg after and suggested a release from this session.  I just hope it was recorded as multitrack.

PS.  Thanks to Abbey Mackay Budge of the Creswick Collective and Caroline Stacey of the Street Theatre for the pic.