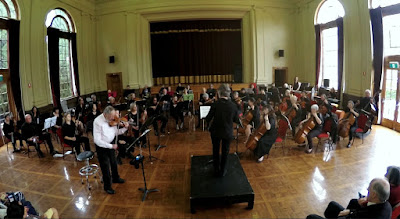 Finding the lost year was the theme, and title, of the Maruki Covid-return concert of last Sunday.  Still Albert Hall.  Still much the same repertoire as we expected to play before the arrival of Covid scotched music in Canberra.  Strangely, despite the time we've had it, it was a difficult concert.  The concerto was changed (the other to reappear in a few months) due to lack of a ready pair of clarinets.  It was replaced by Sibelius Violin concerto played by our ex-LSO master and musical director, John Gould, but it was a strange and fluid thing which challenged us no end.  It's described as a concerto for violin and orchestra, so presumably orchestral parts have their own expression.  Whatever, it's strangely indefinite at times and the parts are oddly unrelatable at other times.  Not that it's unpleasant, but it's willowy or liquid and thus a challenge.  Otherwise, we played a world premier from Alan Hinde, a symphonic poem called In search of lost land which portrays an ocean voyage of discovery with considerable wave-like clarity.  Nice one!  Also Beethoven Egmont overture.  Beethoven is always a winner.  And Schumann Symphony no4 Dmin, the earlier version from 1841.  This had its demands, but ended hugely with exhilaration so a great pleasure to play.  From a jazz POV, I was amused by a pizz bass line that drove the orchestra, in every way a walking bass line.  I could only feel at home in that part.  Even if we are returned, it remains Covid time with a limitation on numbers (thus an easy full house!) and various other demands and no afternoon tea.  But it was fun and demanding, as Maruki outings are.  Maruki doesn't shirk on its programs and this is just one clear example.  Next concert is Beethoven Symphony no.7 (!) and that missing Krommer Double clarinet concerto and Mussorgsky Pictures at an exhibition.  Just a another normal program for this community orchestra!