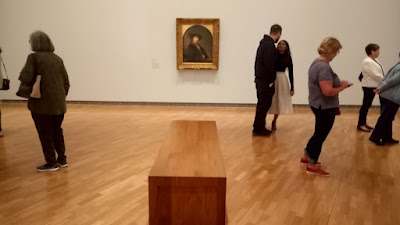 Partly jokingly, the Crivelli was the one I went to see.  We went to the National Gallery today for its latest blockbuster, Botticelli to Van Gogh.  It's a selection of 61 paintings from the National Gallery in London.  It had been in Japan for the Olympics-or-not and now in Canberra for several months.  See it.  Yes, it's a blockbuster and has lots of famous names and those sunflowers.  But they really are famous names and many are works that get into books and it wasn't really so busy.  It's a wonder to have a renowned Rembrandt self-portrait to yourself, even if they pop up all over the place (including Melbourne) but this was a particularly special one.  I was entranced.  Then the Botticelli: too many people around that and my eyes weren't really op to the smaller details, so it got cursory treatment.  We were rushing anyway, to some degree, given the RAAF "Spectacular Aircraft Flypast" over the lake.  Plenty of people there, too, and some expensive machinery, if only in passing.  But people didn't seem so overwhelmed by that one, despite the noisy FA-18s F35s and even the precision piloting of the Roulettes.  Not something you see often but strangely mundane for what must have been such an expensive performance.  But the art was also spectacularly expensive, no doubt, even if some guidance was done by London over Zoom or other.  I missed that there were no earlier works, pre Renaissance, Mediaeval.  The earliest was probably Crivelli with its themed gherkin and apple.  Then on through Dutch and English homely paintings and the Grand tour.  For my amusement there was a Canaletto of Eton Collage (!), all huge chapel in field surrounded by towers and low rise.  Then Castel Sant'Angelo with vista we know but with river banks.  It was only 1760: not that long ago.  And similarly clothes hanging in Piazza San Marco.  There are none there now; only hugely expensive cafes.  Then on through Spanish works and to Impressionists and the end.  With some seriously big names and just a few I didn't recognise.  Not always their most known works, but significant and intriguing.  Not quite London (Virgin of the rocks, Arnolfini portrait, Venus and Mars) but it's here.  Concerning Crivelli, I think I could see more detail in a high res download on the Net, but it's not the same.  It was big and that surprised me.  And that that Rembrandt that took my breathe away.  And a few others too.  See it before you go blind! 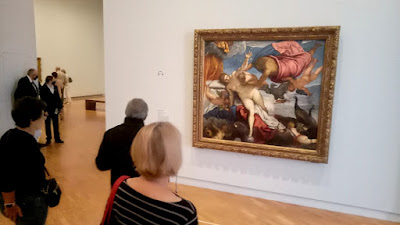 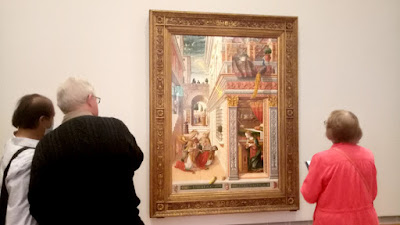 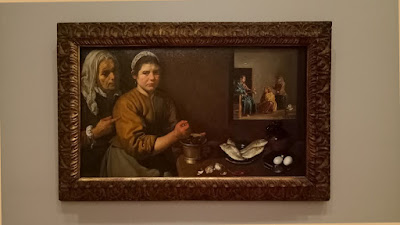 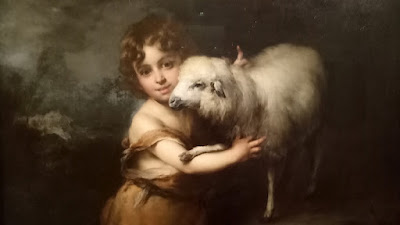 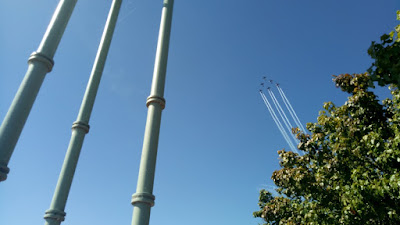