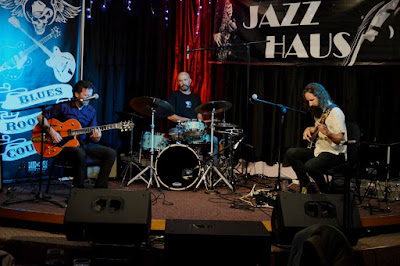 The old Trident Jazz Trio was resident at Trident Bar in Dickson for years, from 2000 or thereabouts.  It was nice that Chris had checked out CJ to determine when they started the residency, but it predated my site (b.2005) by several years.  Whatever, it was a wonderful Tuesday night scene with some excellent sets and renowned visitors.  We heard that core group again at the Austrian Club the other night and they were a revelation.  I could only gasp at James' bass playing, on 5 string JB fretless: melodic, fast but only when called for, otherwise wonderfully relaxed and searching.  Lots of finger work, as in harmonics and chords and long intervallic pairs, thirteenths and the like, and edgy attacks.  And plenty of effects, deep octavers and the rest.  Just a lesson for a bassist.  And Lachlan with his clear guitar, blistering lines and especially his intriguing and leading chords.  He also provided the one original for the night, but said he tends not to play them even though he writes plenty.  Interesting.  And Chris with a most edgy polyrythmic experiments, solos that a sparse and astute, then mixed with African shakers and soft noise.  His kick drum, too, was deep, not fluffy but loose.  And that tom that sat above, thin as.  Fascinating.  These are the choices we make that make our musical character.  They played a string of jazz tunes but you wouldn't know it until a snippet of melody appeared from amongst the grooves or beats or colours.  This is jazz brought to the nightclub-now satisfying both art and night out.  Just an awesome outing and a muse for this muso.