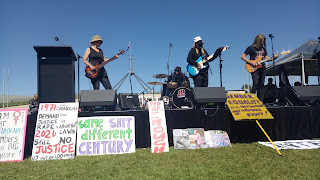 Well, there was some music to report.  It preceded the Women's march as a lead in.  First up was a set with grunge rock band Matriarch.  I was mightily amused by their byline and couldn't resist the listen "...four 'mature' women who should know better. Matriarch have arcane knowledge on living a life of regrets, ageing disgracefully and not giving a f***. Come get enlightened."  They played nicely rocky numbers with social themes and not always too softly spoken.  Titles like: Sucks to be a girl; Messy house; Mansplain; Four mature women who should know better; Too much oil.  A band with themes and attitude; rock guitars and pushy vox and thumpy drums.  Great.  I liked it.  And just before the women's march, Monica Moore singing the feminist classic, Helen Reddy's I am woman, with guitar accompaniment.  That got some cheers!  And one last song, a solo Aboriginal voice singing a short but haunting piece passed down through generations of women.  Sadly, I missed her name.