Not a waltz in sight 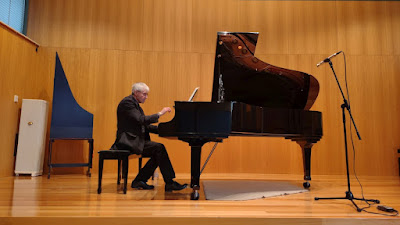 Chopin means waltzes to me and to lots of others who did piano as a kid, but Stuart Long opened my eyes and ears.  I should have known better.  Well, it was still solo piano, virtuosic and perhaps showy, romantic, but this was  a string of works that were much more demanding, even despite the inconsequential titles.  Lots sounded like dances like my waltzes, mazurkas or ballades or somewhat related  nocturnes, but then the preludes and fantasies and etudes suggest something else, even if only something pianistic and technical.  Certainly the etude was technical but one Ballade (op.2 no.38 was taken from a heroic ballad and had intriguing internal movements and developed big emotional power and one Prelude (Dbmaj op.10 no.15) was supposedly a translation of nature's harmonies.  But the biggie of the day was a Fantasie (op.49) which was a response to a Russian invasion of Poland, perhaps his finest work, with patriotic Polish song and meditation and tragic emotions and FC (=Frederic Chopin) as its first notes.  And then a finish on a famous and hugely pretty Nocturne (Ebmaj op.9 no.1) which we all know and deservedly love.  So, a different Chopin played by a mighty local player with commitment and passion and skill.  Thanks to Stuart.  Another winner from such an obvious source.

Interesting Eric. When I think of Chopin, the last thing I think of are Waltzes. I think of Etudes, Nocturnes, Poloniases, Mazurkas, Preludes, and so on. We have several Chopin CDs and I suppose there might be a waltz in there. None of this is very important though and probably just makes it obvious that I never learnt the piano... this sounds like a great concert.

On our way back from Melbourne last weekend, we play ABC's 100 Piano Classics, and got to no. 50. There was quiet a lot of Chopin in there - in fact, looking at Wikipedia I think I counted 8 x Chopin in the first 50 pieces, and a further 12 I think in the second 50. https://en.wikipedia.org/wiki/Classic_100_Piano_(ABC) How good was he!