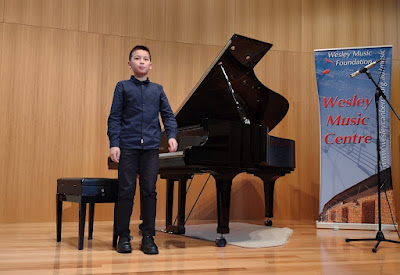 Young players do sound different from older players.  I caught Charles Huang once again and he's certainly a capable player despite his (very) young years; now 11.  It doesn't limit his memory, for he played with no music.  Or the music he takes on, because he played Bach an Chopin and Debussy and Haydn: seriously the masters of the craft.  Or his skills for he plays the stuff with tons of speed and easy facility.  Or his success, having completed his AMusA (age 9!) and having won plenty of first places at the National Eisteddfod.   And that's not the least, as he also excels at Chess.  Some serious admiration is due.  And the music was lovely and inviting, both in choice and in performance.  So he's seriously good and the music was seriously satisfying, even if kids never quite play like seasoned adults with some life under their belts.  So see Charles while he's young because he's sensational now and will likely get even better.  I am in awe.