To sit or not 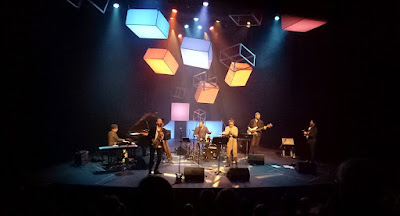 It is one of the great skills of musos to just sit on a beat, I reckon.  It takes the most capable to just do less and enjoy the intensity of the groove.  This was probably my biggest takeway for Mr Ott (it's nothing new), but not the only one by far. Mr Ott is obviously Matt Ottignon, Sydney saxist, who's appeared several times in CJ.  His band is a sextet with influence from Africa (Ethiopia was mentioned) and the Americas North and South (jazz, of course, but one tune was very much of Cuba or Mexico or thereabouts).  Otherwise, solid grooves, odd times, neat heads played on bari or tenor sax and trumpet, thumbed and fingered bass, chords and all, sustained odd drums and times and lots of strange effects, dropping damped chords played with rapid strums and beat-aligned wah and echo and more wah and odd-sounding guitar solos, that 5-string P-bass thud softened with thumbs and the like, more strange sounds from keys, occasional grand piano but plenty of clavinet and dissonances and lovely synth noises, all playful and oddly placed but always fitting.  And always those grooves in difficult-to-count times, although plenty of threes or sixes but syncopations and added notes.  There were a few fours towards the end.  And the prancing and good-natured pleasantries.  Matt often brings a tray of single shots on stage, he said, but not available on the night.  Sad, that.  But he's lanky and jaunts around; someone suggested Peter Garrett as a teacher.  And the smiles and laughs as they moved out of the way of solos.  Nice to see the array to the right for the drum solo and the laughs and leading fills.  And the interval (strange, that, and so unlike a formally staged gig) and  the call for dancing in the aisles at the end of the night (standing at tables with a dance floor and beers would much better suit this band) and just the joy of it all.  Good sound at the venue, too, as noted (Thanks Street Theatre).  Not to mention the seriously satisfying playing throughout.  And back to the ability to just sit on a beat.  They had it and that's something special.  Yep, I enjoyed this one and I wasn't alone.